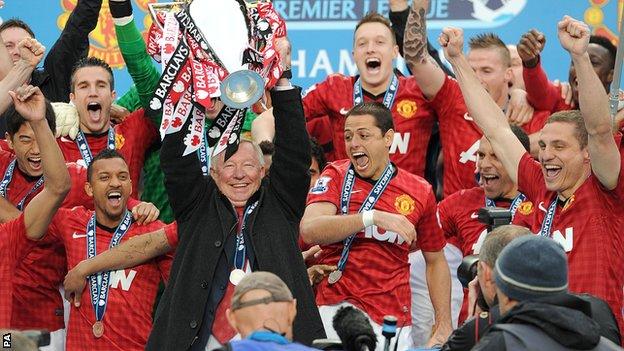 BBC Sport outlines the promotion and relegation issues - and European qualifiers - in England and Scotland.

Manchester United clinched the Premier League title with a 3-0 win over Aston Villa on 22 April. Runners-up Manchester City and third-placed Chelsea will join them in the group stages of next season's Champions League, with fourth-placed Arsenal entering in the preceding play-off round.

English clubs have three places in the Europa League - FA Cup winners Wigan Athletic enter in the group stage, with fifth-placed Premier League team Tottenham Hotspur in the play-off round, and Capital One Cup winners Swansea City in the third qualifying round.

However, even though Chelsea won the Europa League, there will not be an extra Europa place for English clubs because they qualified for the Champions League - and no extra place through Uefa's Respect Fair Play table as the additional places went to Sweden, Norway and Finland.

Reading and Queens Park Rangers were both relegated after drawing 0-0 with each other on 26 April, while Wigan will join them in the Championship after losing 4-1 to Arsenal in their penultimate game on 14 May.

Cardiff City were promoted to the Premier League on 16 April with a goalless draw against Charlton and clinched the title with a 1-1 draw at Burnley four days later. Hull City clinched the second promotion place on a dramatic final day of the season after they drew 2-2 with Cardiff, while Crystal Palace were promoted after beating Watford 1-0 after extra time in the play-off final.

Bristol City were relegated on 16 April after a 1-0 home defeat by Birmingham, The other two relegation places were decided on the final day when Wolverhampton Wanderers went down after losing 2-0 at Brighton and Peterborough United joined them after a 3-2 defeat at Crystal Palace.

Doncaster Rovers are promoted to the Championship as League One champions after their thrilling 1-0 win at third-placed Brentford on 27 April. Runners-up Bournemouth were promoted a week earlier following their 3-1 home win against Carlisle, but a goalless draw at Tranmere on the final day cost them the title. Yeovil Town earned the third promotion place after beating Brentford 2-1 in the play-off final.

Bury became the first Football League team to be relegated after losing 1-0 to Oldham on 13 April, while Hartlepool United and Portsmouth were both condemned to League Two without kicking a ball when Oldham beat Yeovil 1-0 three days later.

Pompey were effectively down anyway as they knew they would be deducted 10 points when they came out of administration, which they did on 19 April, while the last relegation place went to Scunthorpe United who, despite a 3-1 win over Swindon on the final day, finished three points from safety after Colchester won 2-0 at Carlisle.

Gillingham became the first Football League team to be promoted when they beat Torquay 1-0 on 6 April, and clinched the title with a 2-2 home draw against AFC Wimbledon a fortnight later.

They will be joined in League One by Rotherham United and Port Vale, who clinched promotion on the final day by beating Aldershot 2-0 and drawing 1-1 at Wycombe respectively, and Bradford City who beat Northampton 3-0 in the play-off final.

On the final day of the season, Barnet were relegated to the Conference Premier after losing 2-0 at Northampton, while Aldershot Town lost by the same scoreline at Rotherham and finished as the Football League's bottom club.

Mansfield Town won the title by beating Wrexham 1-0 on 20 April and are promoted to League Two with Newport County, who beat Wrexham 2-0 in the play-off final.

The bottom four teams are relegated, with AFC Telford United becoming the first side to lose their status in non-league's top flight after a 3-0 home defeat by Nuneaton on 30 March. Ebbsfleet United were relegated after their 3-1 defeat by Telford on 13 April, the same day that Barrow went down after losing 2-1 at Cambridge, and Stockport County joined them after their 4-0 defeat at Kidderminster on the final day of the season.

The relegated sides will be replaced by the champions and play-off winners of the Blue Square Bet North and South divisions.

Celtic won the title on 21 April after defeating Inverness Caledonian Thistle 4-1 and will enter the Champions League at the second qualifying-round stage.

There is no extra place through Uefa's Respect Fair Play league as the additional places went to Sweden, Norway and Finland.

Bottom club Dundee were relegated to Division One after their 1-1 draw with Aberdeen on 5 May.

Champions Partick Thistle won the title with a 2-0 win at Falkirk on 20 April and will be promoted to the SPL, subject to meeting stadium criteria.

Bottom club Airdrie United were relegated to Division Two after their 2-1 defeat by Partick on 13 April, while ninth-placed Dunfermline Athletic went down after losing 3-1 on aggregate to Second Division side Alloa in the play-off final.

Queen of the South clinched the Second Division title and automatic promotion with a 6-0 win at Brechin on 27 March.Alloa Athletic were promoted after beating the ninth-placed First Division team, Dunfermline, 3-1 on aggregate in the two-legged play-off final.

Albion Rovers were relegated to Division Three after losing 4-1 at Alloa on 27 April, but ninth-placed East Fife stayed up after beating Third Division side Peterhead 1-0 on aggregate in the play-off final.

Champions Rangers clinched the Division Three title on 30 March after they drew at Montrose, and will be promoted to Division Two. But no other team will be promoted after Peterhead lost the play-off final 1-0 on aggregate to Second Division side East Fife.

There is no relegation from this division, although East Stirling finished as the bottom team in Scottish senior football.