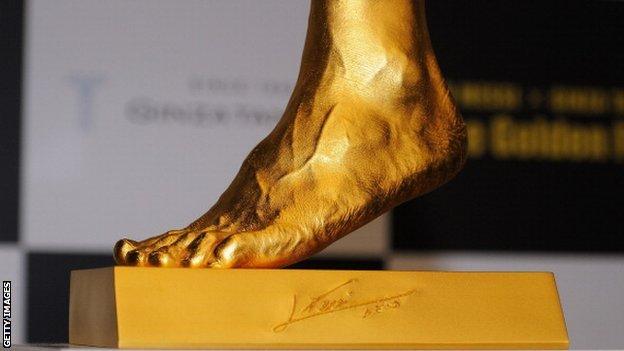 A pure gold replica of Lionel Messi's left foot has been unveiled in Tokyo.

Valued at £3.5m ($5.3m), it was created by jeweller Ginza Tanaka to celebrate the man voted the best player in the world four times in a row.

The Barcelona player's foot was cast at the end of 2012 and the finished article will go on sale on Thursday.

Part of the proceeds will go to Messi's foundation, and be used to support children in areas hit by the Japanese natural disasters of 2011.

In a video message, the Argentina international said: "I'm honoured to have my foot recreated in pure gold."

Messi's brother, Rodrigo, attended the unveiling and said: "It's exceptional, you can see each line on the foot."

The sculpture weighs 25kg and is 25cm tall and 28cm wide.

There are two other pieces inspired by the player for sale. Messi's golden footprint is available for £63,00 while the "Golden Foot Mini", which is half the size of the main gold foot, is for sale at £28,000.