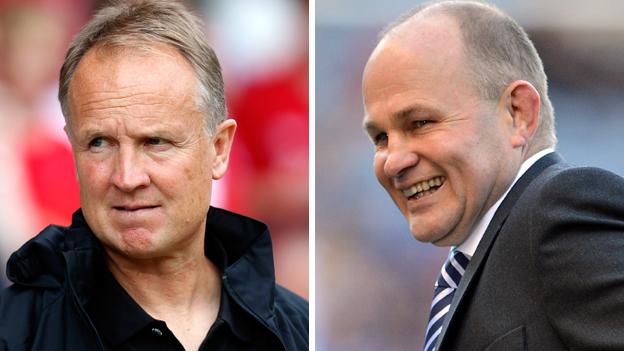 The two coaches are connected by Steve Lansdown, who owns both Bristol City and Bristol Rugby - where Robinson was recently named on the backroom staff.

"We want to see if we can open his mind up to a few ideas," O'Driscoll told BBC Radio Bristol.

"Andy is a well-respected coach and that's a connection we want to make."

Who is Stephen Lansdown?

Robinson, a former Bath player and coach, started his role with Bristol this week, while O'Driscoll was appointed by City in January.

"I think it was a coup to get someone like Andy to Bristol," added O'Driscoll. "Hopefully we'll build a relationship that can blossom."

It was recently announced the rugby club, currently residing at the Memorial Stadium - home of Bristol Rovers - will be moving in with Bristol City, either at their proposed new stadium in Ashton Vale or a newly-redeveloped Ashton Gate.

The man behind the move is Guernsey-based businessman Lansdown, who is head of umbrella organisation Bristol Sport Ltd.

The 60-year-old multi-millionaire has already invested heavily in City and Bristol Rugby, and has recently given financial backing to Dino Zamparelli, a Bristol-based racing driver with Formula 1 ambitions.

Lansdown is known to have an active involvement at Bristol City, and was present at their 0-0 home draw with Brighton on Tuesday night.

O'Driscoll met Lansdown before the game and said: "Steve is a huge benefactor of the football club and for Bristol sport in general. If you can't share a hot drink with him, then you'd be foolish."