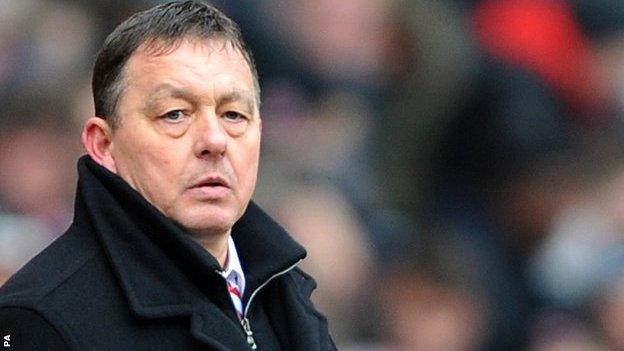 Nottingham Forest boss Billy Davies said his side showed their ability to grind out a victory after Tuesday's "leggy" 1-0 win over nine-man Ipswich.

The win was Forest's fourth in a row and takes them to within two points of the Championship play-off places.

It was a poor game of football. We looked a very flat side...but it's a great three points and we have to be pleased with it

But Davies told BBC East Midlands Today: "I feel sorry for the fans. It was one of those nights where you just felt frustration.

"One thing it certainly was not was an entertaining game. We looked leggy."

The Scot said that Saturday's evening kick-off against Sheffield Wednesday played a big part in their below-par performance.

"We put a lot of work into that night game [against Sheffield Wednesday]," the Scot said.

"It was a very frustrating night. We had to grind out a result. We had no zip about our play. But it's a great three points and we have to be pleased with it.

"It was a poor game of football. We looked a very flat side.

"That couple of hours later kick-off with a late recovery - sometimes, without making excuses - can affect your play.

"They [Ipswich] have kept four clean sheets over the last six games and we are obviously delighted with the three points and to get that break. It was more important to win and to play well and that is what we did."