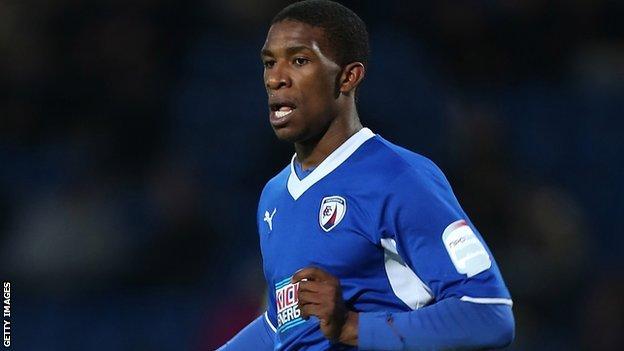 Chesterfield winger Tendayi Darikwa says he has benefitted from the month-long break he has had because of a hernia operation.

Darikwa, 21, made his return to the first team as a substitute in Tuesday's 1-0 defeat by Cheltenham.

"I feel great. I'm able to train and play to my maximum again," he told BBC Radio Sheffield.

"It has been good to have a little rest because it has been my first season in the first team."

He added: "I feel refreshed and hopefully I can push on and get back to starting games again."

Darikwa had featured 29 times for the Spireites before being ruled out for a month at the start of February.

Paul Cook's side have won just three times in 2013 and are 11 points adrift of the play-offs with 10 matches to play.

The Football League's Young Player of the month for December is confident they can get back to winning ways in Saturday's home match against Bristol Rovers.

"We have to work hard in training and bounce back on Saturday," he added, following the narrow defeat to promotion-chasers Cheltenham.

"We've shown everyone tonight and through the season that we can compete with the teams who are up and around the play-offs.

"We can't get too far ahead of ourselves. Hopefully we can put in a good performance for our fans and get the three points."