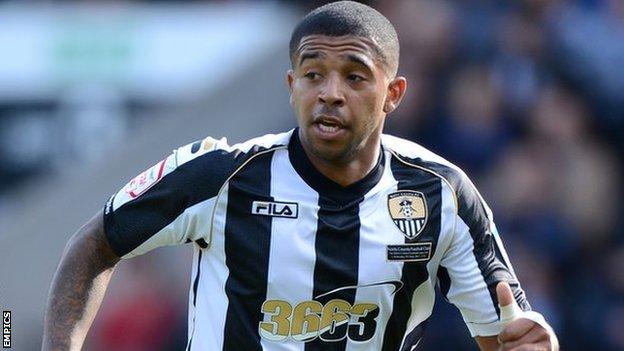 Torquay United have signed Notts County midfielder Joss Labadie on loan until the end of the season.

The 22-year-old has made just six starts for County

"He has always been someone that I thought I'd like to sign and never really had the opportunity.

"Whenever my teams have played against Joss, I've always thought he was a good player," Gulls interim boss Alan Knill told the club website.

Labadie began his career as a trainee at West Brom and had loan spells at Shrewsbury, Cheltenham and Tranmere before joining the Merseyside club full time in the summer of 2010.

"'Joss is a big, powerful player who can also pass the ball,'' said Knill. "I first came across him when he was at West Brom and I've watched him grow up from there.

"He is a central midfielder and he gives us extra size and power in that area. He's a good passer of the ball as well and his pedigree is obviously good after coming through the system at West Brom."

Knill as they fight against relegation, having after

Since Ling's leave of absence, Torquay have won just once, the 1-0 derby victory at Exeter City on 28 January.

They have failed to win any of their last eight games and are just two points above the relegation zone.