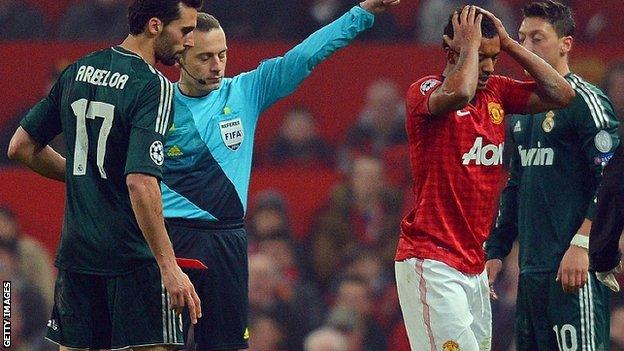 Nani was sent off by Turkish referee Cuneyt Cakir in the 56th minute for a high challenge on Alvaro Arbeloa.

United went on to lose the tie 3-2 on aggregate.

Nani's red card is subject to a disciplinary review which will decide whether the automatic one-match ban should be extended.

Manchester United manager Sir Alex Ferguson reacted angrily to the sending off and did not appear for the post-match interviews, with assistant Mike Phelan taking his place.

Phelan to speak publicly so soon after the match, saying: "It's a distraught dressing room and a distraught manager. That's why I am sitting here now."

In addition, the Manchester United players walked through the "flash zone" - an area where the waiting media can talk to players - without the required minimum of two stopping. Fines are the most likely sanctions for the media misdemeanours.

Uefa says its disciplinary panel will judge the case on 21 March, and a spokesman added: "There are no issues for us regarding the sending off."

There was no mention of Manchester United defender Rio Ferdinand, who sarcastically applauded Cakir after the final whistle when the players surrounded the officials.