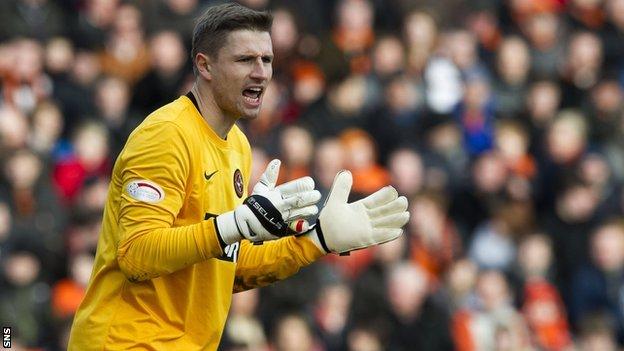 "I enjoy playing for Dundee United very much and, having settled in the area, it is an easy decision for me to sign on for a further year," he said.

He is a very good shot stopper

And manager Jackie McNamara added on the club's website: "This extension is merited because Rado has shown that he is an excellent SPL goalkeeper."

Cierzniak has featured in every competitive match for United this season, having previously played for clubs in Cyprus, Ukraine and his homeland. He picked up his only Poland cap in 2009.

"I came here to improve as a player and I feel I am doing so," explained the 29-year-old.

"The club, players and supporters have all helped with this and I look forward to exciting times over the next few years at Dundee United."

McNamara was appointed Tannadice boss in late January and is pleased to have tied down his goalkeeper on a longer deal.

"It can sometimes be difficult for a foreign player to come into a club and settle but he has done so superbly," said the manager.

"He is a very good shot stopper and in my time here has shown some excellent aerial handling skills.

"It is a bonus for him to know his future is secure until at least May 2015 and it is great for us to know he wants to remain a United player until then also."