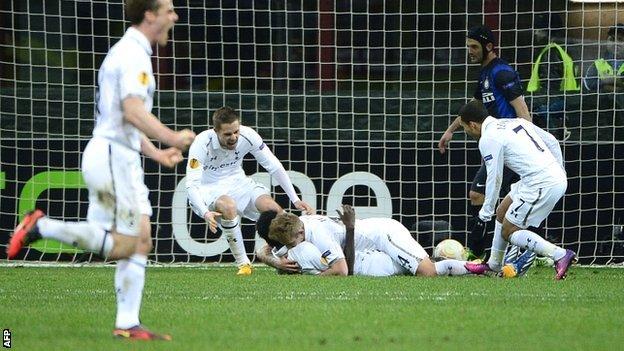 Emmanuel Adebayor's extra-time goal earned Tottenham a place in the Europa League quarter-finals after they held on to knock out a resurgent Inter.

The Italian side overturned a three-goal deficit from the first leg as Antonio Cassano headed in before Rodrigo Palacio's finish and a William Gallas own goal drew the tie level.

But after 96 minutes, Adebayor stabbed in following Mousa Dembele's shot.

Although Ricardo Alvarez made it 4-4 on aggregate, Spurs' away goal was vital.

Adebayor, who scored his fourth goal of the season, made the telling finish for the Premier League side after an otherwise mixed night for the striker, although it was Dembele who was the architect.

The Belgium midfielder was Tottenham's saviour in the last round as his injury-time goal earned Spurs an aggregate victory over Lyon, and in Milan he broke forward before unleashing a shot that Inter goalkeeper Samir Handanovic could only parry.

Inter had been inches from winning the tie at the end of normal time, but Esteban Cambiasso dragged a shot wide when a goal would have put his side 4-3 in front on aggregate.

Late in extra-time with the tie at 4-4 the Italians pressed for a winner and they will perhaps feel they deserved more after mounting a superb comeback to move to the brink of qualification.

But somehow Spurs sneaked through after a tie where the importance of the suspended Gareth Bale was obvious.

The result was Tottenham's first defeat in the Europa League during their 2012-13 campaign, but Andre Villas-Boas' side became the first English team to reach a European quarter-final this season.

Yet for periods during the game Spurs were outnumbered in midfield and in the first half they paid for committing men forward as gaps opened up behind a reshuffled defence.

Gylfi Sigurdsson filled in for Bale on the left of midfield and provided an early threat for Spurs with some accurate set-pieces but left-back Kyle Naughton was caught out twice by long through-balls down the Inter right before Cassano finally scored.

Cassano shot straight at Brad Friedel with his first opening and went down theatrically under pressure from Gallas with the second, but he made up for those misdemeanours at the third time of asking on a night where he was at the hub of Inter's best moves.

Again the ball was swept down the right, and this time the Italian striker connected with Palacio's cross at the back post with a downward header.

Six minutes later Inter should have been further in front when Cassano returned the favour with a pass over the top to Palacio, but the Argentine lobbed a shot onto the bar.

Despite their first-leg advantage, Tottenham named Jermain Defoe and Adebayor in attack, and at times, it contributed to their vulnerability.

They still created enough chances in the first half to register a crucial away goal, though, with the best of them falling to Adebayor, who chipped over when clean through. The Togolese then almost set up Jan Vertonghen soon after the re-start as Tottenham continued their positive approach.

Palacio's goal changed that plan after 52 minutes with Cambiasso feeding him for a cool finish past Friedel. Spurs boss Villas-Boas then decided to withdraw Defoe to bolster his midfield in the hope that Spurs could see the game out.

Instead, Javier Zanetti used all his experience to win a free-kick after being pushed by Kyle Walker and when Cassano whipped it in, the ball was diverted into his own goal by the unlucky Gallas.

With the tie now level, Naughton and then Cambiasso almost won it before the extra period. And as the added 30 minutes ensued, Gallas missed a great chance to make amends for his earlier mistake.

Adebayor then finally made his mark on the game, and although Alvarez drew the aggregate scores level, finding another goal proved too much to ask for a shattered Inter.