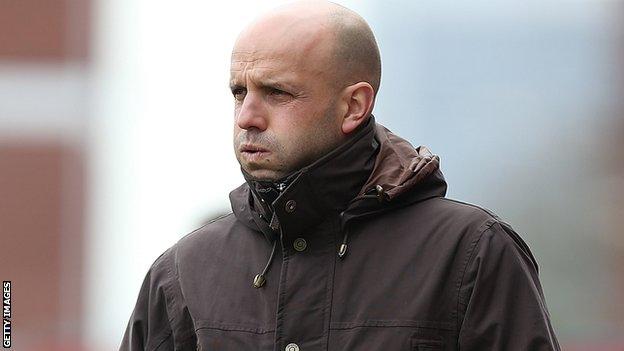 The defeat meant City missed out on the chance to move into third place in League Two, remaining three points off the automatic promotion places.

"We didn't show enough ambition going forward or didn't have enough quality in our build up to get in attacking areas," Tisdale told BBC Radio Devon.

"It was a disappointing evening and I have to say a below-par performance."

We're putting young boys in and at the moment Jake Gosling has shown that he's good enough.

Exeter fell behind when goalkeeper Artur Krysiak let a long-range effort from Ollie Norburn through his legs after 23 minutes, a setback from which they never really recovered.

"Goals do change the flow of a game and that certainly changed the flow of the game, it's very hard to recover from such a poorly conceded goal," said Tisdale.

"It was a shocking goal to give away and at that point their resolve intensified and the purpose of their game became very clear for them and our game became muted and we didn't really respond."

However, the Exeter manager praised the impact of second-half substitute Jake Gosling.

"He's improving, but we have to hope that the players in and around the squad can add something to the proceedings.

"It's a big period of the season that we're in and we're making substitutions and putting young boys in and at the moment Jake Gosling has shown that he's good enough.

"He's a little untested, I'm learning as I see him play. He's doing pretty well, but it's going to be a difficult month so everyone that's used has to contribute and Jake contributed today."