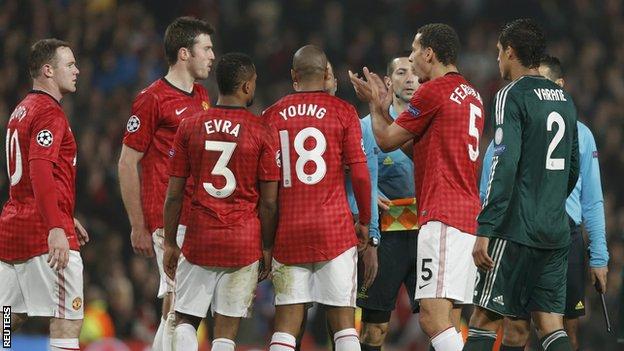 Rio Ferdinand will not be punished by Uefa for his conduct at the end of Manchester United's Champions League loss to Real Madrid.

Ferdinand applauded sarcastically in the face of Turkish referee Cuneyt Cakir after full-time following the decision to send off Nani.

United lost the tie 3-2 on aggregate.

United were leading 1-0 on the night - and 2-1 on aggregate - when referee Cakir dismissed Nani for a high challenge on Alvaro Arbeloa in the 56th minute.

But the Spanish side capitalised on their numerical advantage as they scored twice to win the second leg 2-1, securing their place in the quarter-finals.

Ferdinand, 34, was visibly upset at the full-time whistle as he and his United team-mates surrounded the match officials.

But after receiving the referee's report, a Uefa spokesman said no action would be taken against the defender, although they confirmed other proceedings.

They will assess whether Nani's red card is worthy of punishment beyond an automatic one-match ban, while Ferguson's refusal to speak to the media is a breach of Uefa regulations.

No United player spoke to the media either, which also breaks competition rules.