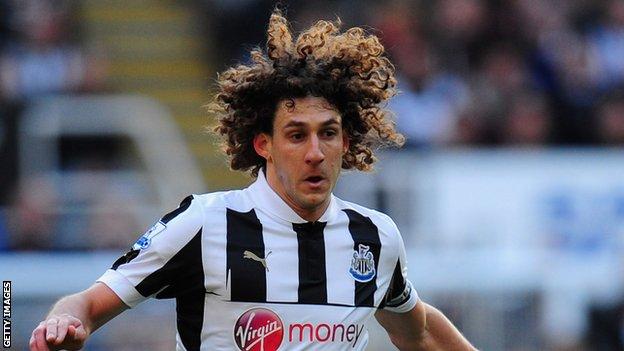 Newcastle captain Fabricio Coloccini could be out until May after he broke two bones in his back making an extravagant overhead clearance.

Coloccini, 31, landed awkwardly in the 4-2 defeat to Southampton last month.

The centre-back, who demanded to leave the club in January, has returned to his native Argentina for a week to work with his national side's medical team.

Manager Alan Pardew said: "There's no treatment he can have. It's going to be between three and seven weeks."

Coloccini joined Newcastle from Spanish side Deportivo La Coruna for £10.3m in 2008 and signed a new four-year contract with the club last year.

His appearances this season have been limited due to a hamstring injury picked up on international duty and a three-match suspension after being sent off against Liverpool.

He also asked to be sold for personal reasons in the winter transfer window, a request that was turned down.