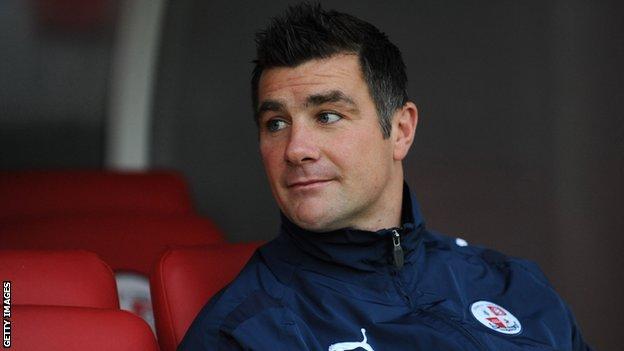 Crawley Town boss Richie Barker is pleased with the progress the side has made after remodelling his squad.

The Reds have been beaten just once in their last five matches and currently lie 10 points off the League One play-off places.

He told BBC Sussex: "I will be amazed if anybody here has seen football like we have played over the last month ever at this place before.

"We have now got people in that can play the way that I want to play."

To be where we are, with the transitions that have gone on with players and managers over the last six to twelve months is fantastic

Barker added: "I think our performances over the last six weeks are probably the best in the season.

"I would put it down to hard work on the training ground and being able to bring in good, athletic, young players who can get around the pitch.

"If you play football you have to be athletic because we like to move the ball and if you do that, the players have to move about."

Barker believes that his young side are capable of further progress in the future.

Despite Barker's recent praise, Crawley have actually failed to win at home since New Year's Day, when goals from Mark Connolly, Billy Clarke and Nicky Adams helped the Reds to a 3-0 victory over Colchester.

"To be where we are, with the transitions that have gone on with players and managers over the last six to twelve months is fantastic," he said.

"I think we are getting there now. I said it won't happen overnight and it still won't.

"You look at the age of some of the players and this is something that will improve the club over the next few years."

Crawley hold two games in hand on the majority of teams above them in the table and having reached 50 points in midweek, the target most clubs regard as sufficient to avoid relegation, Barker hopes his side can now press on in a bid to achieve a third successive promotion.

"Fifty points is a nice milestone for us and does ensure we will be playing at this level, at least, next season," he added. "Now hopefully we can go gung-ho and maybe nick one of those play-off places.

"There are some winnable games in there and we don't want to let a good season fizzle out. We'll be having a right good crack at it.

"All we can ask is that we stay in the race and that's what I've said to the players.

"We have punched well above our weight all season. To be even talking about the play-offs with 12 games left shows how much everybody has done here."