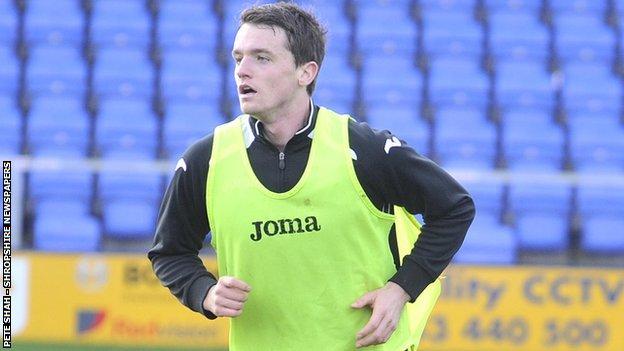 On-loan Shrewsbury Town midfielder Stephen McGinn is intent right now on keeping his side in League One.

But, while Town's survival prospects are top of his agenda, he still hopes to make it at parent club Watford.

"My only disappointment since I came is that we haven't pushed on higher up the table and that we're still involved in the battle down the bottom," McGinn told BBC Radio Shropshire.

"But I want to get back to playing at the highest level I can."

Watford captain John Eustace, who I respect, had worked with Graham Turner before at Hereford and told me that he'd take care of me, and I've got games here. It's worked out well

McGinn was a regular in the Championship at Watford until suffering a knee ligament injury in February 2011 which forced him to undergo reconstructive surgery.

After a year out and two changes of manager - having replaced Malky Mackay, Sean Dyche spent just a season in charge before becoming a victim of Watford's Italian revolution, being replaced by Gianfranco Zola - McGinn has not had a look-in at Vicarage Road this season.

But the Scotsman is hopeful that getting back to action and proving his fitness in his 10 games so far for League One relegation battlers Shrewsbury will not have gone unnoticed by promotion-chasing Watford.

"I felt I was playing the best football of my career up until my injury," said McGinn.

"I hope to use this spell to progress my career back to where it should be.

"I've still got an option at Watford. The decision ultimately is theirs as to whether they keep me on for another year, but I've not fully sat down with Gianfranco yet."

It was on the advice of Watford captain John Eustace, who had played on loan under Town boss Graham Turner at Hereford six years ago, that McGinn chose to come to Shrewsbury in January.

And he does admit that the option of staying with the Shropshire beyond the end of the season should not be discounted.

"I had one or two different options," said McGinn. "But John Eustace, who I respect very much, had worked with Graham Turner before at Hereford and told me that he'd take care of me, and I've got games here. It's worked out well.

"If it comes to it, I'd be open to discussion but I'm not really looking any further than Saturday."

Having plunged back to within four points of the danger zone, after successive defeats by high-flying pair Doncaster Rovers and Walsall, Town host Orient this weekend (9 March, 15:00 GMT).