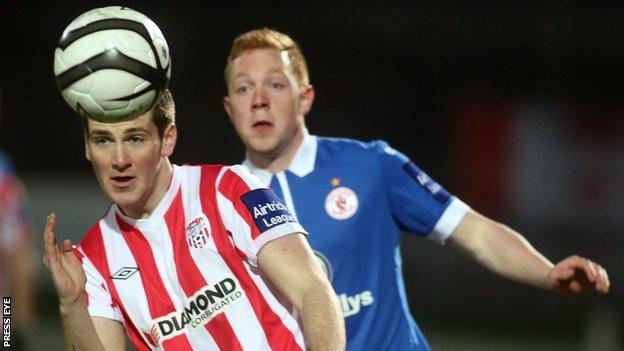 Sligo dominated early on and it was little surprise when Elding put the visitors ahead on 30 minutes.

Derry improved in the second half as Mark Griffin went close to equalising.

But despite Derry's late rally, Sligo, on balance, deserved to take all three points after producing another classy performance full of neat passing and enterprise.

Derry were already without Kevin Deery, Patrick Kavanagh and Sean Houston heading into the game and they received a further blow just before the kick-off when defender Stewart Greacen was ruled out for at least two months by a knee injury.

With Barry McNamee playing out of position at left-back and having little understanding with flank man Thomas Crawley, Derry struggled badly early on to counter the strong running of Rafael Cretaro and Cameroon international Joseph N'Do.

Derry's early caution as they played Griffin as a lone striker, with Rory Patterson in a withdrawn role, appeared to hand the initiative to Sligo and the champions reaped full benefit.

The goal that had been coming arrived on the half hour as Cretaro's pass set up Elding to score after McNamee had been left exposed in defence.

Rafter's introduction at half-time gave Derry more of a threat in attack in the second half and good work by Shane McEleney and Ruaidhri Higgins set up a chance for Griffin on 61 minutes but the striker's lofted shot over keeper Gary Rogers was a yard wide.

Rafter then had a penalty claim soon after a diving challenge by the Sligo keeper but referee Neil Doyle adjudged that Rogers had nicked the ball away legally before colliding with the substitute.

Cawley was inches away from doubling Sligo's lead with a fierce drive which hit the Derry crossbar and Elding just needed a touch to find the net after another great move by the champions.

Inevitably, Derry produced a late rally as Rogers saved a Ryan Curran header before Molloy and McNamee had efforts cleared off the line in injury-time.

But Sligo probably just about deserved their win as Derry's home form woes of last season reared an unfortunate early ugly head in this year's campaign.