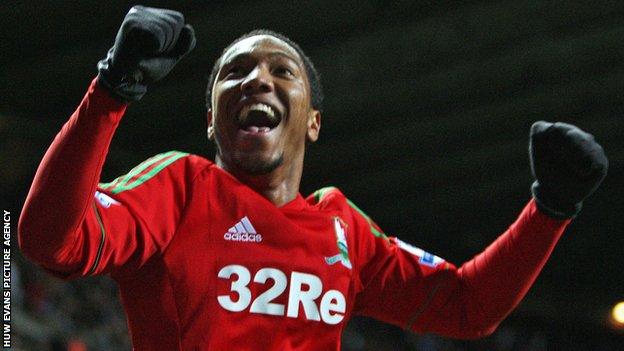 Laudrup has already made it clear he wants De Guzman, 25, to extend his stay at Swansea after the end of his season-long loan from Villarreal.

A permanent move from the Spanish club would be Swansea's preference but Laudrup said: "Everything is possible.

"I think the most important thing is that he is here [next season]."

Laudrup expects competition from other clubs for De Guzman's signature, adding that Villarreal could also want the Dutch international in their side next season.

De Guzman was one of many leading players to leave the club at the end of last season following their relegation to Spain's second division.

But they are firmly in the race to return to the top flight, and Laudrup says that promotion would make Swansea's task of securing Canada-born De Guzman more difficult.

"Some are in a relegation fight, some are playing, like in the case of Villarreal, to go up. They have bigger things to think about than just one individual player."

De Guzman is Swansea's second-highest scorer with eight goals this season, two of which came in the Capital One Cup final win over Bradford City.

The Dutch international spoke after the final of his wish to stay and Swansea are set to open talks with his representatives.

Villarreal paid almost £7m to sign De Guzman from Mallorca on the final day of the transfer window in August 2011. He has just over three years left on his contract.

Should they wish to sell, the Spanish club will be looking to recoup all, if not more, of that fee, and Laudrup fears many other clubs would be able to trump Swansea in any bidding war.

"He's playing very well and scoring goals," he said. "But he's happy here and I know he wants to stay here. But it's difficult to say because there is so much interest."

Another player apparently wanted by some leading clubs is centre-back Ashley Williams, a reported £8m target for Arsenal.

Laudrup takes the interest in his players as a compliment and accepts the "rumours" as part of life as a manager.

"We will have to live with that from now on until the end of the season," added the Dane.

"But it means people have seen what we have done here and what the players have done in their performances, because bigger clubs are supposedly interested in some of our players."