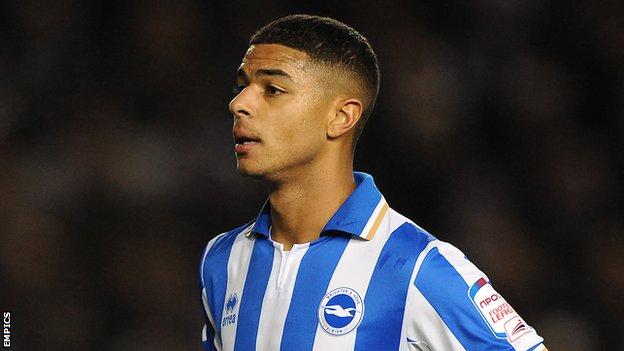 The 23-year-old, who qualifies through a grandparent, has been included in the Scotland squad for the World Cup qualifiers against Wales and Serbia.

Poyet told BBC Sussex: "I'm really, really happy for him. When any player gets their first call from the national team it is always special feeling.

"You go to another level when you become an international."

Joined Brighton in August 2010, initially on a short-term deal

Has made 128 appearances for the Seagulls, scoring twice

Qualifies for Scotland via his grandfather, who was born in Edinburgh

Bridcutt joined Brighton in August 2010 on an initial short-term contract but has gone on to establish himself as the Sussex club's first choice holding midfielder.

He has made over 110 league appearances for the Seagulls and was named the club's player of the season last year.

The former Chelsea trainee, who has spent his whole career playing in England, qualifies for Scotland through his grandfather, who was born in Edinburgh.

"He has 10 or 15 days and now I am going to try and calm him down and make sure he plays well for us in the next three games.

"I hope he will be able to make his debut."

"Liam is a guy I've been watching," Strachan said. "I've seen a lot of his games. At the time I didn't realise he could possibly play for Scotland.

"Mark McGhee has seen a lot of Liam and he did his homework into the type of guy Liam was and whether he wanted to play for Scotland.

"We've put that all together and we've come to the conclusion that he's good."

Scotland's qualifiers at the end of the month fall between Albion's Championship matches against Crystal Palace and Nottingham Forest.

Poyet is unconcerned that Bridcutt will spend the time between those fixtures on international duty.

"The more internationals we have in the team, the better team you have," the Uruguayan added. "I have no doubts about that.

"Sometimes you buy a player who is already an international but sometimes you need to help a player to get in there.

"The most important thing is he has done the job on the pitch. It is totally deserved."