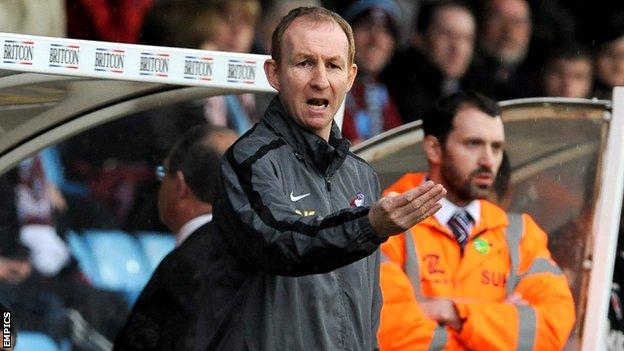 The Gulls have not won since the end of January and have taken just one point from a possible 24 ahead of their meeting with Oxford United on Saturday.

But Knill says there are signs that his side is getting its confidence back.

"Once you win one, you find there's a steamroller effect and all of a sudden the belief and confidence does come back," he told BBC South West Sport.

Knill has been in charge of the Gulls for three matches after coming in until the end of the season in place of Martin Ling, who is on extended sick leave.

And the former Scunthorpe boss was impressed by his side in the which ended a seven-game losing streak.

"I thought that the performance at Accrington, although as a manager or coach you're always critical when the actual game's going on, when you sit back and watch the game on DVD some of the stuff was pretty good.

"There were signs that we are getting better and we just have to continue that," said Knill.

"There's plenty of games left, we're trying our best to add to the squad and help what's already here, but I have full confidence in the players, they've been excellent for me."