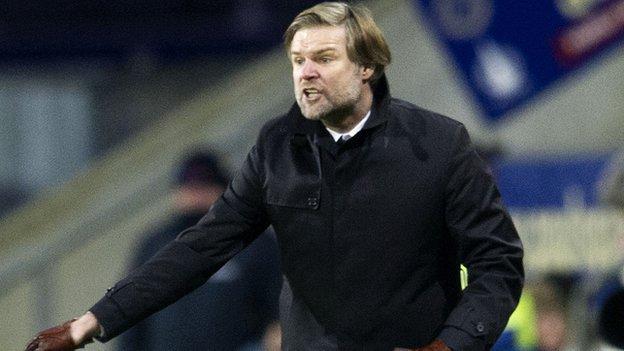 Coventry City are "positive" over their hopes of bringing in Falkirk manager Steven Pressley as their new boss.

Personal terms have been agreed and everything now hinges on Scottish First Division side Falkirk agreeing to accept a suitable compensation payment.

"We will continue working to reach a conclusion good for all parties."

Falkirk gave the Sky Blues permission to talk to Pressley on Wednesday with regards to the club's vacant manager's job.

But the financially-challenged Midlands club were already aware then of the compensation that would be required to lure Pressley away from central Scotland.

The imminent arrival of a new manager (a press conference for Pressley is expected to be held on Friday), and the costs involved, would now appear to contradict the rumours that Coventry are close to administration.

Following the resignation of the club's vice chairman John Clarke on Monday, there had been suggestions that administrators were about to be appointed - or that, in the worst-case scenario, the club might even be liquidated.

But, after a denial by Clarke on Tuesday, the League One club's chief executive Tim Fisher has also spoken to BBC Coventry & Warwickshire to reject those claims.

Coventry have been without a manager for almost three weeks since Mark Robins left the Ricoh for Huddersfield Town on Valentine's Day.

Since then, Coventry have won three times on the road under caretaker boss Lee Carsley, with two home defeats sandwiched in between, going into Saturday's trip to relegation-haunted Scunthorpe.