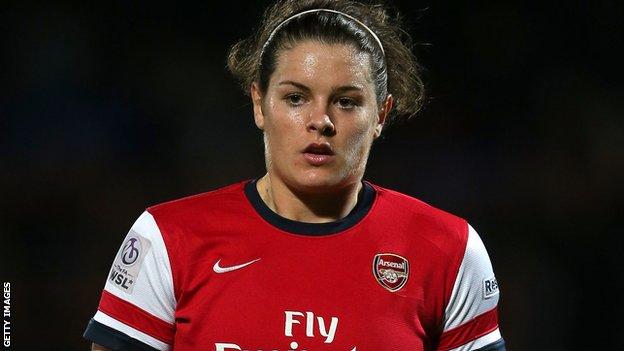 Arsenal players will be at the heart of a big home nations clash as England face Scotland in Friday's Cyprus Cup Group A encounter in Larnaca.

The England squad contains six Gunners compared to Scotland's two, but what a duo Kim Little and Jennifer Beattie have proved to be.

The Scottish duo both scored in a 2-0 win in the 2011 Cyprus Cup - their first win in 34 years against England.

If we beat Scotland and then New Zealand on Monday it would put us in the final, and that would be a great way to end the tournament

Looking at Friday's fixture, which falls on International Women's Day, Beattie recalled the 2011 victory against England: "We were ecstatic, it was an absolutely massive win for us.

"It wasn't just the fact that we'd beaten them, it was also that we absolutely deserved to win the game with a really good performance.

"Hopefully we can produce a similar display this time because we need a result after losing our first game to New Zealand.

"It's going to be fun coming up against the Arsenal players I usually play alongside. We're all good mates - but not for 90 minutes on Friday!"

One Arsenal player who Beattie and Little will line up against will be Ellen White, who hit the final goal as England beat Italy 4-2 in their group opener.

"It'll be strange playing against Jenny and Kim," said White, "but we have to treat them like any other opponents and forget friendships until the game's over.

"We want to get our own back for their win against us last time, but more importantly we want another victory to stay top of the group.

"If we beat Scotland and then New Zealand on Monday it would put us in the final, and that would be a great way to end the tournament."

While England and Scotland go head-to-head, Northern Ireland face South Korea hoping for their first points of the tournament after a 5-1 trouncing by the Republic of Ireland..

Manager Alfie Wylie said: "It was obviously disappointing to lose to the Republic, especially the goals we conceded.

"But the girls are determined to bounce back and there's no reason why we should lack confidence against South Korea.

"They beat us 1-0 in this tournament last year, but we can turn the tables if we're at the top of our game."