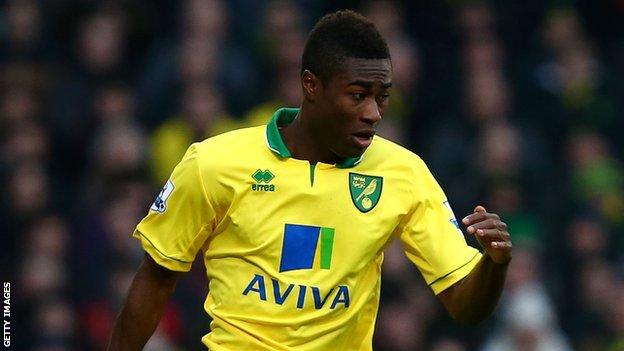 Norwich City midfielder Alexander Tettey will remain sidelined for "a couple of weeks" with a knee injury.

The 26-year-old was initially expected to be a short-term loss, but has not featured in City's last two games.

"We'll look for him to come back in really good shape and make the impact we would like him to make in the last period of the season."

Norway international Tettey has added athleticism and power to the Canaries midfield, featuring 22 times since arriving from Rennes in the summer.

Former Leeds captain Jonny Howson has stepped up in his absence for the 2-1 win over Everton and 4-0 loss to Manchester United.

"We've been advised to rest Tettey for a short period of time," added Hughton. "There's no doubt it's the right decision.

"It is a loss because of his continuity and number of games he's played.

"But Jonny Howson is a player we value very highly and I think overall it's been a disappointing season for him, because he is generally a player who has been playing in his career."

He has played just once since October and Hughton said: "Andrew Surman has had an operation on his knee which will keep him out for a number of weeks."