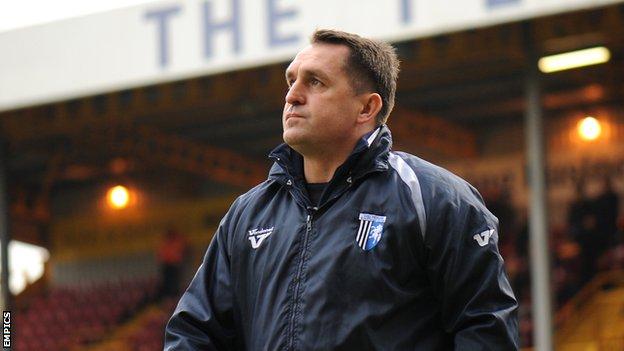 Gillingham manager Martin Allen is convinced his squad will deal with the pressure of the season run-in and secure promotion from League Two.

The Gills, who have led the division for the majority of the season, are currently six points ahead of fourth-placed Rotherham.

He told BBC Radio Kent: "We are hanging on in there at the moment and just need to keep picking up points.

"The people who can deal with it best will come out on top. That will be us."

The people who can deal with it best will come out on top. That will be us

Allen continued: "That is the challenge we face. They [the chasing pack] want it. We've got to protect it and stay on top.

"We have been top for about six months and you have got to give credit to the players.

"It is the same right across the board. It is important not to get too sad or jump for joy too much. We have got to concentrate on our jobs."

Allen is backing the Gills, who have picked up the majority of their points on the road this season, to improve their form at Priestfield. The Gills have lost six of their 18 home games in League Two.

"There is definitely room for improvement," Allen said. "It hurts when our players get a lot of criticism when we don't win at home as I know how hard the players try and work.

"If they were flash, didn't care and didn't train or do their jobs then I wouldn't be happy. But they do their best and they care.

"We are not playing dreadfully but it has got to get better. We have got enough good players to play with confidence, show some personality and some nuts on our own patch."

On a personal level Allen says he is relishing involvement in the League Two title race.

The 47-year-old has previous experience of chasing promotion, with Brentford, MK Dons and Cheltenham but has also battled relegation with the Bees and the Robins, along with Notts County and twice with Barnet.

"I love it," he said. "I get employed just to save clubs from getting relegated. We always stayed up apart from one [Cheltenham in 2008-09], which I had a disaster at.

"It's different to when you are at the bottom. I normally get given jobs at clubs which look like they are going to get relegated.

"I love those teams at the bottom and managing those clubs because you are always fighting to prove you are better than other teams."