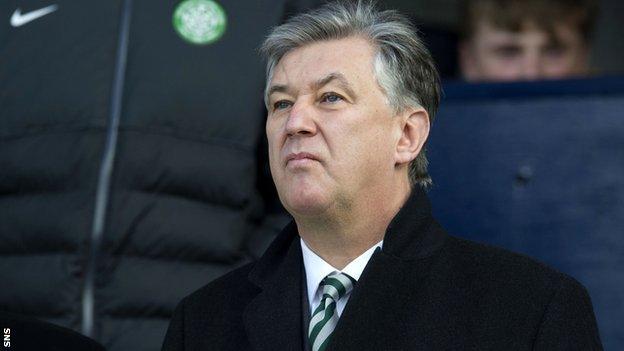 Celtic chief executive Peter Lawwell admits the club is likely to lose some of its leading stars in the summer.

Celtic rejected three bids from Norwich for striker Gary Hooper in the summer, with Victory Wanyama also linked with a move to England.

"I think it will be inevitable that one or two players will want to move on," said Lawwell.

However, Lawwell moved to reassure fans that Celtic would look to bolster their squad in the event of departures.

"Stability's a very important thing in football, so we would hope to get the balance right to make sure that there is some quality in that may replace those that are going," he said.

Lawwell also admitted that Lennon's contribution to the team in reaching the last 16 of the Champions League would not have gone unnoticed by other clubs.

But the chief executive insisted that he was confident at being able to keep his manager at the club in the longer-term.

"It's been a great season so far. The Champions League has been wonderful; wonderful for Celtic and wonderful for the players and for Neil," he said.

"Clearly, we aren't naive enough to think that people won't be recognising that elsewhere. If he keeps progressing and being successful, I'm sure he will be courted at some point.

"But Celtic is a big part of Neil Lennon and maybe he won't be able to get elsewhere what he gets here at Celtic.

"We are hoping that he stays for a long, long time."