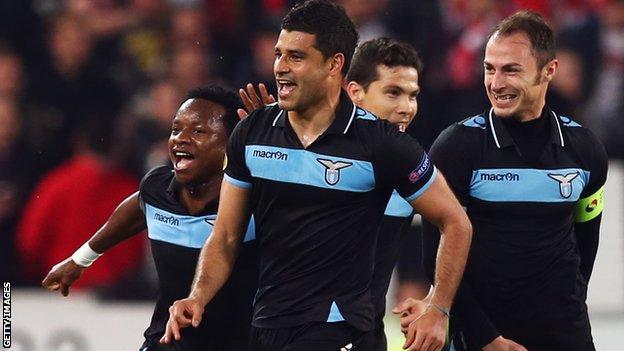 Lazio took a big step towards the Europa League quarter-finals with a 2-0 win away to VfB Stuttgart.

Ederson gave the Italian side a first-half lead, which was doubled by Ogenyi Onazi following a fine solo run and chip on 56 minutes.

Federico Macheda, on loan from Manchester United, could not make an impression for Stuttgart against the club he played for at youth level.

Levante and Rubin Kazan each had a man sent off in their 0-0 draw.

Rubin's Cristian Ansaldi was dismissed for a second bookable offence eight minutes into the second half, while Michel followed for the hosts soon after having been shown a straight red card.

The eight ties included three featuring English sides, with Gareth Bale putting Tottenham on their way to an emphatic 3-0 win over Inter Milan with a header after just six minutes.

Chelsea slipped to a 1-0 defeat to Steaua Bucharest, courtesy of a first-half penalty from Raul Rusescu, while Newcastle United held Anzhi Makhachkala 0-0 in Moscow.

Zenit St Petersburg,conquerors of Liverpool in the previous round, were beaten 2-0 by FC Basel and reduced to 10 men in stoppage time at the end of the match.

The Swiss side took the lead after 82 minutes when Marcelo Diaz pounced onto a rebound off Zenit goalkeeper Vyacheslav Malafeev, and after Luis Neto was sent off for a foul on Mohamed Salah inside the area in injury time, substitute Alexander Frei sealed the win from the penalty spot.

Benfica beat Bordeaux 1-0 in Lisbon, but the French side were left to rue a piece of bad luck that helped the hosts to victory. Moreno Rodrigo's long-range shot cannoned off the bar, but Bordeaux goalkeeper Cedric Carrasso could do nothing as the ball hit the back of his hands before rolling over the line.

Substitute Fahid Ben Khalfallah came close to equalising for Bordeaux on 85 minutes, but Benfica keeper Artur kept his side ahead with a fine save low to his right.

Fenerbahce edged to a 1-0 win away to FC Viktoria Plzen, Pierre Webo giving the Turkish side a valuable away goal nine minutes from the end when he tapped into an empty net following a parried save from Plzen keeper Matus Kozacik.