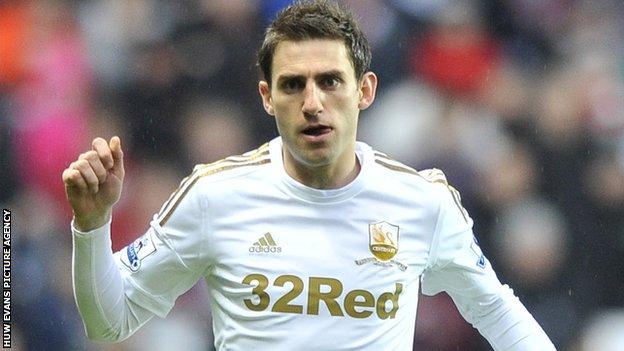 Swansea City defender Angel Rangel has signed a two-year contract extension keeping him at the club until 2016.

Rangel, 30, whose original deal was due to expire in June 2014, has been a key player since he joined the Swans from Spanish side Terrassa six years ago.

He follows Michu, Leon Britton, Wayne Routledge and Garry Monk, who have all signed new deals in recent months.

I am settled here, I am enjoying my football, I have married a Welsh girl and I'm building a house in Swansea - I feel like a Welshman now

"It shows how well things are going here that so many of the squad have signed new contracts," said Rangel.

"The club realises the players are doing a great job and the board and chairman [Huw Jenkins] are rewarding us for that.

"We are getting better and better as a club again this season and everyone here is keen to play their part in helping Swansea City grow.

"It has been a great story for me since my debut at Oldham in League One.

"There was the promotion as champions in League One, then we did so well in building our reputation as a passing team in the Championship during a time when people said we couldn't do it.

"Then we got through the play-offs in the Championship against Reading at Wembley, and that was an amazing achievement.

"After an incredible first season in the Premier League, people doubted whether we could do the same again or even stay up - but look at what we have accomplished already."

This season Rangel has helped Swansea City to eighth in the top flight and was also part of the side that lifted the Capital One Cup with a 5-0 win over Bradford City.

The League Cup title means the Swans will be playing in the Europa Cup next season.

"We are in the top half of the Premier League, we have 40 points already and we have a first major trophy for the club. What a story this is," he added.

"We have shown what we can do in the Premier League, now we are looking forward to showing what we are capable of achieving in Europe."

Rangel was among five Swans in the PFA League One Team of the Year as the club marched to the title in 2007-08, with another medal following after winning the Championship Play-Off Final at Wembley against Reading two years ago.

The Spaniard has hinted at possibly staying on at the Liberty even when his playing days are over.

"I arrived in 2007 and I've already have six excellent years at Swansea," beamed Rangel.

"I am settled here, I am enjoying my football, I have married a Welsh girl and I'm building a house in Swansea - I feel like a Welshman now.

"I am very happy on a personal and professional level.

"My new contract will take me up to nine years here, and who knows what will happen after that."