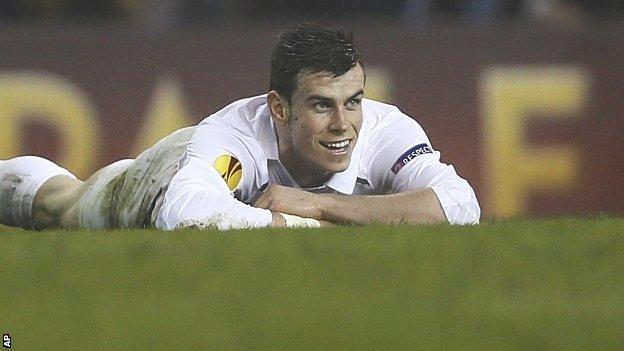 Tottenham manager Andre Villas-Boas said he was happy that Gareth Bale received a yellow card for diving in his side's 3-0 Europa League victory over Inter Milan on Thursday.

Bale scored with a header at White Hart Lane but was booked for simulation for the fourth time this season.

The Welshman will now be suspended for the second leg at the San Siro.

"With this result we would have asked him to get a yellow card to be clean for the last eight," said Villas-Boas.

"We are in a good position but it is not finished, so we will miss Gareth. He has been influential in consecutive games but hopefully we can make it without him.

"He is a tremendous player, so obviously he is going to be missed, but an opportunity might arise for another player."

Bale's 50th Tottenham goal, and an 11th in nine games for club and country, meant he would still have stolen the headlines without his booking.

But the 23-year-old has received plenty of criticism for diving and replays of Thursday's incident suggested he need not have gone down under the challenge from Walter Gargano.

"It is a difficult decision for the ref," said Villas-Boas.

Bale has only failed to score in one of his last nine matches. He has opened the scoring in seven of those games.

"I don't want to go into that. We have a wonderful player to enjoy and it is ridiculous if we go on like that."

Inter manager Andrea Stramaccioni conceded his side had lost to the better team on the night.

"First of all we suffered from a physical point of view. They created us lots of problems with their aerial game," he said.

"Having said that, we had two great chances to score and we have not been able to do it.

"We all know that it is going to be very hard [in the second leg], a tough situation to face, but at the end of the day we are Inter."