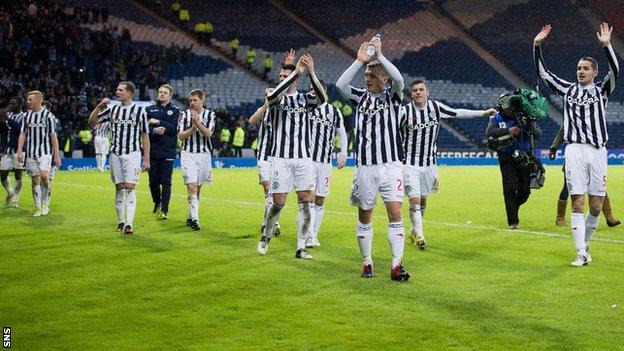 St Mirren return to Hampden on Sunday in search of their first ever Scottish League Cup final win.

The Buddies take on Hearts hoping to end the Paisley faithful's near 26-year wait for a trophy win at the national stadium.

And the goalkeeper who lifted that trophy is confident Danny Lennon's side can overcome Hearts and give the current generation of supporters a day to cherish.

Campbell Money told BBC Scotland: "I think the biggest difference will be the fact that there'll be an expectation level that maybe wasn't there for the semi-final.

"In a lot of people's eyes they'll be the favourites. And I'm one of them, I expect St Mirren to win.

"In 1987, Dundee United were also in the final of the Uefa Cup that year and that shows you the quality that they had in their team. We were the underdogs and clear underdogs.

"On this occasion, I think St Mirren are favourites to win it."

"Craig made a significant contribution in the semi-final with the penalty save," Money said of Samson denying Celtic's Charlie Mulgrew from 12 yards.

"He's developed into a very, very good goalkeeper so he'll have a big say on how St Mirren do on the day, I'm sure.

"I've been really impressed with John McGinn and Conor Newton in the middle of the park as well, they've done an excellent job and I thought Marc McAusland was outstanding in the semi-final.

"As a group, they'll be fine, they'll be ok. They've played at Hampden before, they played in the semi-final at Hampden so they'll know what that's about.

"They've got enough experience in the team in vital areas that I don't imagine that'll be a major problem for them. I think they'll cope with the occasion okay."

One of the reasons St Mirren may be regarded as favourites is the plight of Hearts this season, with financial problems and injuries meaning the loss or absence of several first-team players.

"If Hearts play to their capabilities and I'm talking about even the young ones like Kevin McHattie, Jason Holt and Jamie Walker, they're very, very talented boys and if they play well on the day, anything can happen," adds Money.

"I just think St Mirren have the edge. They've also got the added mental boost of having beaten Hearts in Paisley the other week. These things are significant in the build-up.

"It'll be a great day and hopefully St Mirren will get the result."