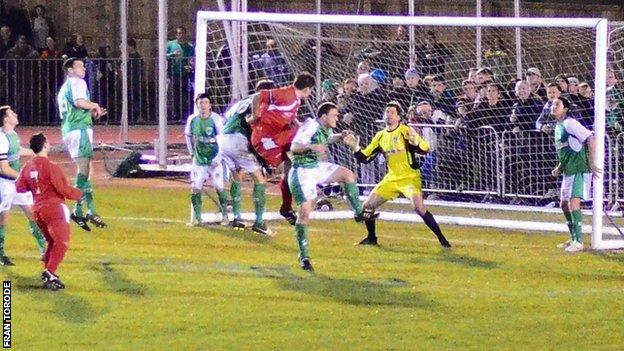 The two sides had met the previous Saturday, setting up the game at Footes Lane with a crowd of 2,597.

The visitors went ahead after 15 minutes through Tom Evans, with Ross Allen equalising on the half hour mark.

Glyn Dyer' scored just before half-time and Dave Rihoy secured the side's progress with in the 73rd minute.

Before the match Guernsey coach Tony Vance described the match with Walsall Wood as one of the biggest football matches in the island's history.

He told BBC Guernsey: "We knew Walsall Wood were a very good side, especially on the counter attack and they like to double up and attack down the wings so we knew our recovery runs had to try to negate that threat.

"We can celebrate, to be in the last four of a national competition, 540 team started this journey and we're there now and we're only little old Guernsey."

The island side faces Spennymoor Town, who play in Northern League Division One, across two legs for a place in the final.

Guernsey host the first leg at Footes Lane on 23 March and then travel to the Brewery Field in County Durham on 30 March.

Vance said: "They're like the Man United of this league so we'll have a go, but for now we'll celebrate."

In the Combined Counties Premier Division Guernsey still have 21 games left to play after bad weather and the FA Vase run have decimated their fixtures since December.