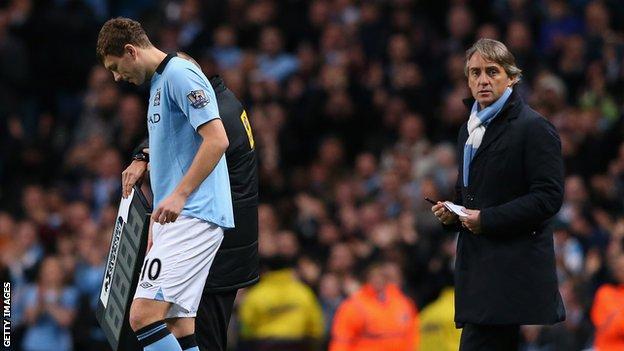 Manchester City manager Roberto Mancini has admitted Edin Dzeko could leave the club in the summer.

Dzeko, 26, has been linked with a move to Borussia Dortmund with the Bundesliga champions reportedly negotiating a deal with City.

"At the moment, there is nothing. In the end, maybe, I don't know. In the summer, it could be possible," said Mancini about the Bosnian striker.

City signed Dzeko from Wolfsburg in January 2011 for £27m.

The Bosnian striker has scored 38 goals in 99 appearances since joining the Premier League champions.

Despite 13 goals this term, Dzeko has failed to earn a regular starting place in Mancini's line-up.

Mancini revealed in November that Dzeko was frustrated with his "super-sub" tag following a number of goals after coming off the bench.

But the City manager does want the former Wolfsburg forward to stay at Etihad Stadium despite his concern he could leave.

"Dzeko is an important player for us. We want him to stay here," he said.