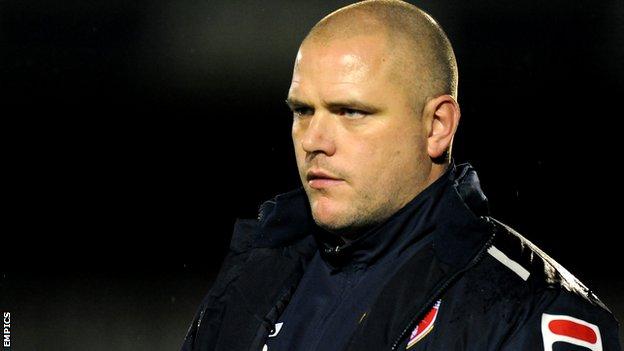 Morecambe boss Jim Bentley believes a good run in their remaining games would give them an outside chance of reaching the League Two play-offs.

Bentley set a target of 50 points for safety this year, which they can reach by not losing to Barnet on Saturday.

With 10 games left, the Shrimps sit in 11th, nine points off the play-offs.

"If we get a run together with seven games to go, which we did a couple of years ago when we got in the play-offs, why not?" he told BBC Radio Lancashire.

"I don't think we'll go down now. I think we're safe, which was first and foremost when the season started.

"It's an outstanding achievement. We want to get to 50 points as soon as possible, hopefully it will be Saturday and then our next target is to improve on last season."

Since letting supporters in at the Globe Arena for free for the game against Dagenham and Redbridge on 8 January the Shrimps have taken 20 points from 11 games, leaving them with an outside chance of reaching the play-offs.

Working with one of the smallest budgets in the Football League, Bentley guided the club to 15th in League Two last season and with 10 games to go he is hoping to better that.

"Look at the teams around us. We're two points behind Fleetwood and we're ahead of the likes of Chesterfield, Oxford, on the same points as Bradford," he added.

"Even if you look down, Bristol Rovers, Plymouth, they are all big football clubs and we are probably the smallest squad in it.

"The fans have got a team they can be proud of. They certainly give it their all win, lose or draw."