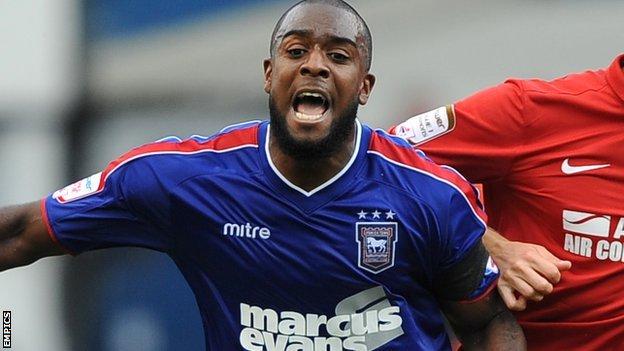 Much-travelled striker Nathan Ellington has signed a short-term contract until the end of the season with League One side Crewe Alexandra.

Following his release by Ipswich Town in January, the 31-year-old former Wigan Athletic and West Bromwich Albion man joined Crewe on trial a month ago.

And he has impressed at Gresty Road, playing three Under-21 League games for Crewe and scoring in all of them.

He now looks set to make his Alex debut at Colchester on Saturday.

Bradford-born Ellington, who has three times made seven-figure moves in a 14-year professional career that began with Bristol Rovers, had been without a club since having his contract cancelled at Ipswich on January transfer deadline day.

Now he has the chance to kick-start a Crewe side who, despite reaching next month's Johnstone's Paint Trophy final, have lost four of their last five games to fall out of League One play-off contention to 14th in the table.

"Looking from the outside, coming from the Championship to League One, it does not look like there is much difference," Ellington told BBC Stoke. "And you never lose the hunger to score goals.

"Crewe have always been a good footballing side. They're a club who do things the right way. A lot of players have moved on from here to bigger and better things."

Ellington has hit 147 goals in 497 career appearances since first making a name for himself at the Memorial Stadium.

Ellington will be eligible to play in the JPT final against Southend on Sunday, 7 April

After a season-long loan at Derby followed by another at Preston, he left Watford for Ipswich in the summer of 2011.

But he made just one league start in 18 months at Portman Road, and was allowed out on loan to League One side Scunthorpe in November.

The striker has not scored in competitive football since April 2011.