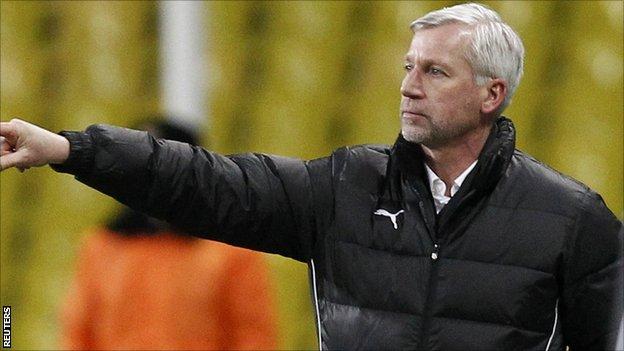 Manager Alan Pardew has said Newcastle United's goalless draw away at Anzhi Makhachkala has given his side the initiative in their Europa League tie.

United host the Russian club at St James' Park next Thursday, in search of a first quarter-final place in the competition since 2004-05.

"I fancy us against anyone at home," Pardew told BBC Newcastle.

"If you're going to go through in Europe you have to win, we've given ourselves an opportunity at home."

Pardew continued: "I'm hoping we get a result on Sunday (against Stoke), that will be important for the mood and will give me the buoyancy to play my strongest possible team. This is now an optimum competition for us."

The Magpies' defensive performance helped maintain a clean sheet in below-freezing conditions at the Luzhniki Stadium in Moscow, despite the efforts of former Barcelona striker Samuel Eto'o.

A clean sheet on an unfamiliar synthetic surface denied Anzhi, who were playing 1,000 miles away in Moscow because of safety concerns in their home region of Dagestan.

"It was an outstanding performance in conditions that really didn't suit us," Pardew said.

"Our technical players played really well and we limited them to just two shots on target and I'm delighted. We've given ourselves a one-off chance to win it."