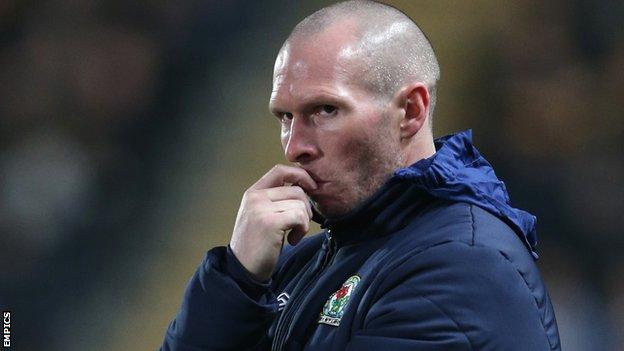 Blackburn manager Michael Appleton is looking forward to the distraction of an FA Cup quarter-final against Millwall after poor recent league form.

Since beating Arsenal 1-0 in the fifth round, Rovers only earned one point in the Championship.

"Let's look forward to what's going to be a day off from the league, which has been quite difficult for us over the last couple of weeks," he said.

"I'm really excited about the game, I've got an extra spring in my step."

Appleton has guided three teams in the competition this season, having begun at Portsmouth, followed by a short stint at Blackpool before finally moving to Ewood Park in January.

Appleton stated after last month's 2-0 loss to Hull that the win at the Emirates had caused a hangover effect among the squad and that appears to have continued in recent weeks.

However, the tie will feature two teams currently struggling for form, as Kenny Jackett's Millwall have won just once in nine league games.

"Maybe, as a manager, I'll never get an opportunity like this (to get to Wembley) and that's certainly the message I'll be getting across to the players," Appleton told BBC Radio Lancashire.

Since beating Arsenal in the FA Cup fifth round on 16 February, Blackburn have taken just one point from five league games:

"It would give everybody at the football club just the biggest lift you can ever imagine.

"The fact is one of us is going through. It's a Championship club competing in a semi-final at Wembley and I just hope and pray we're the ones doing that."

David Dunn is back in training for Rovers, who were also boosted in midweek by Leon Best's return to action in the loss to Bolton after suffering cruciate knee ligament damage during pre-season.

The striker, who cost £3m from Newcastle last summer, is relieved to be back playing football again.

"There were times when I didn't feel part of it as I was always in the treatment room," he said

"Even the little things such as putting my tracksuit on I feel back and when you feel like that off the pitch you're going to be raring to go on it.

"It's good that we can get a bonus out of it as it's not been the best of seasons for us and the high expectations we had."