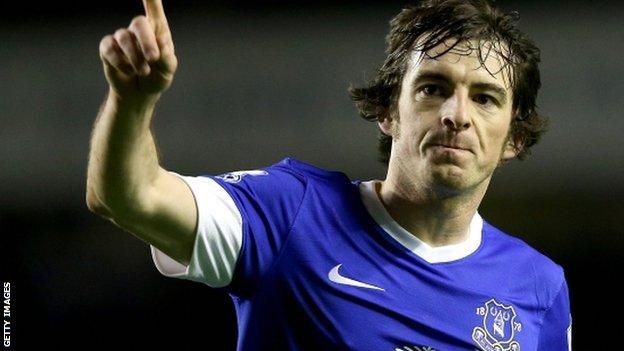 Everton host Wigan in the FA Cup quarter-finals on Saturday but their 1995 triumph in the tournament remains the club's last silverware.

"It has been too long," said Baines, who is facing his former club Wigan.

Everton boss David Moyes added: "To win the FA Cup is something I'd love to do with the players because we've been at it a long time."

Moyes took Everton to the FA Cup final in 2009 but his side lost to Chelsea. The club also lost to Merseyside rivals Liverpool in last year's semi-finals.

I still remember going to the 1995 cup final and I'd fancy our chances against that team, no disrespect to them

Everton are now lying sixth in the Premier League after a strong start to the season had seen them in touch with the Champions League positions.

Moyes, who joined the club in 2002, is out of contract at the end of the season and could wait until then before deciding whether to stay at Goodison Park.

"It is the one thing that is missing for him and the club," added 28-year-old Baines.

"The manager has been at the club for a lengthy spell and silverware would cap what has been a good spell for him."

The England international also sees the competition as an opportunity for the current crop of players to stake their claim to a place in the club's history.

"I still remember going to the 1995 cup final and I'd fancy our chances against that team, no disrespect to them," he said.

"They had a good team then and we've got a good team now but they will be remembered because of what they achieved and that surpasses anything.

"If anyone wants to stake a claim to being better than them well then prove it. If you don't achieve anything then you are not going to get remembered."