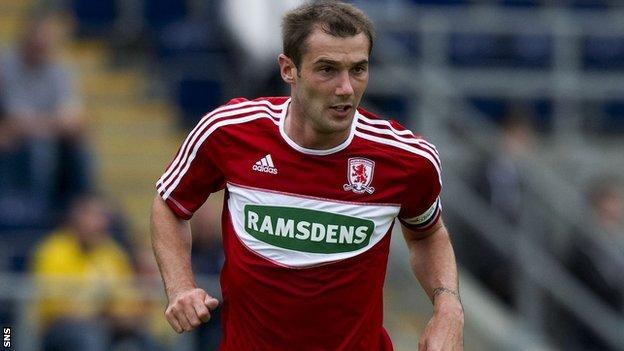 Hibernian's new signing Kevin Thomson will play at the club for free until the end of the season.

It is the midfielder's second spell at Easter Road, having emerged from their youth system and played for them between 2003 and 2007.

"With finances so tight at the moment, I've decided to put the club first and play for free," he told Hibs' website.

"I want to help the team to achieve as much success as possible between now and the end of May."

He re-signs at a time when Hibs have a Scottish Cup semi-final to look forward to, as well as their on-going challenge to secure a high Scottish Premier League finish.

That continues on Sunday with a home derby against Hearts and Thomson is eligible to play.

"I always gave my all for the shirt and I'm looking to produce committed performances that will help the team challenge for a top-six place and for the Scottish Cup," Thomson said.

"I've been training with Hibs for a couple of weeks now and I've seen how much quality there is within the squad, especially in midfield.

"So I'm not expecting to be picked straight away, but hopefully I will be given an opportunity to help the team drive forward and enjoy some success."

Hibs' Irish boss Pat Fenlon is thrilled to have the 28-year-old on board for the rest of the campaign.

"Kevin is a fantastic player, who will add extra quality to the squad and we're pleased to be able to sign him," said Fenlon.

"The fact that he has agreed to play for nothing speaks volumes about his attitude and the squad will benefit from his experience and leadership qualities.

"Fitness-wise, he looks fine but he hasn't played much."

Scotland international Thomson following his release from Middlesbrough, who he left

After coming through Hibs' youth ranks and becoming first-team captain, Thomson moved to Rangers in 2007 and joined Boro in 2010.

However, injuries restricted his appearances at the Riverside Stadium.