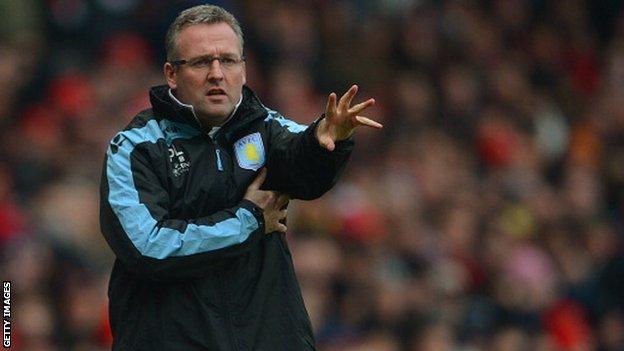 Aston Villa boss Paul Lambert denies his team are lacking confidence despite their drop into the relegation zone.

"The confidence is there. I don't need to lift them. I can see it in training and the last few games," Lambert said.

"In the last few performances, we don't look like a team playing under pressure. We're not lacking confidence or any courage to compete with teams."

Villa face a vital week with a trip to Reading on Saturday, followed by a visit from bottom club QPR.

They are boosted by the news that skipper Ron Vlaar is training again after two weeks out with a calf injury but midfielder Fabian Delph will start a two game ban after collecting his 10th yellow card of the campaign in the 1-0 home defeat by Manchester City on Monday.

Villa have won only five of their last 38 Premier League games, and one of the last 11. But Lambert added: "I do believe we will be fine if keep playing the way we are."

Relegation would increase the pressure on the club that had to be modest in its spending in the January transfer window, but Lambert said he was not thinking beyond the end of the season for now.

"I think there are more important things to worry about than finances at the minute," he said.

"The main focus now is to stay in the league. It's not just the finances if you go down. No-one wants to go down, for your own prestige, everything."

And he added: "Do I enjoy this situation? Listen, I love the pressure of it. It's my job."