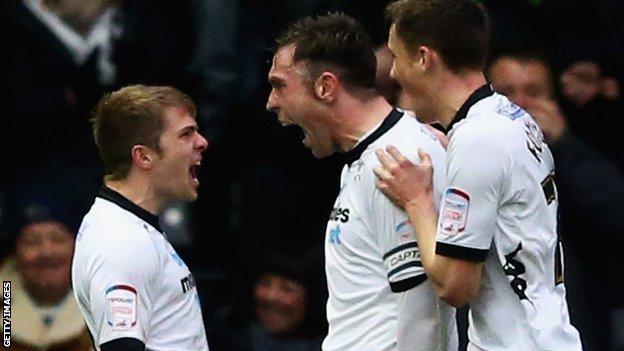 The Foxes improved after a limp first-half display and substitute Jeffrey Schlupp's fierce strike made it 2-1.

Derby's victory in the 96th East Midlands derby between the sides ends a run of five consecutive defeats against the Foxes.

The Rams last took points off the Foxes in March 2010, when they won this corresponding fixture 1-0 thanks to an own goal from Andy King.

But Derby had the better chances late on and held out for a deserved win.

It was an East Midlands derby victory the Rams desperately needed after a good day for many of the Championship's strugglers, and it means Nigel Clough's men maintain their six-point gap over the bottom three.

Derby dominated the first period and were in control against a Leicester side who have now gone five games without a victory and have slipped down to sixth spot following Nottingham Forest's 2-1 win at Hull City.

Leicester looked like a side lacking in confidence against a Derby team who grew in stature and matched their endeavour with quality in the final third.

Captain Keogh gave them the platform for their crucial win, running onto leading scorer Ward's teasing set-piece to head past Foxes goalkeeper Kasper Schmeichel on 16 minutes.

Martin almost made it 2-0 soon after and the on-loan striker did double the lead just before the break when, after a good move down the left flank, he coolly headed Craig Forsyth's cross into the corner of the net from eight yards.

Schlupp, who has been on trial with Manchester United, increased the tension around Pride Park just after the hour when his blistering shot flew past Frank Fielding after a neat lay-off from David Nugent.

Nugent could have drawn the Foxes level within a couple of minutes, only to shoot straight at Fielding.

But the hosts regained their composure and remained the better side.

Ben Davies saw a fizzing 25-yard effort fly just over the bar and Martin had a deflected effort saved by Schmeichel.

However Derby did not need the cushion of a third goal and held on to win with relative ease despite six minutes of injury time and some sustained late pressure.