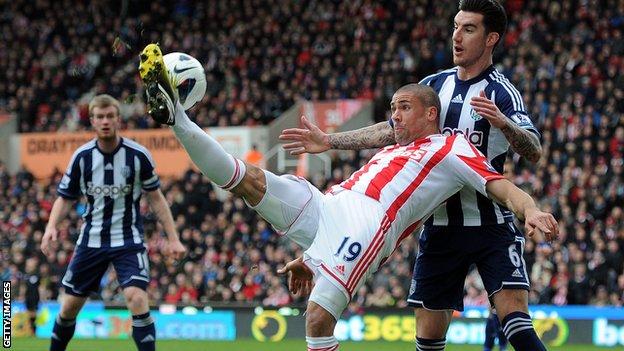 Stoke City moved into the top half of the Premier League table after a feeble goalless draw against West Bromwich Albion at Britannia Stadium.

The Potters have won just one Premier League game since the new year and lacked attacking inspiration against the eighth-placed visitors.

They could have snatched victory in injury-time but substitute Kenwyne Jones prodded straight at Ben Foster.

"Right at the end Stoke could have won it through Kenwyne Jones. Is it a point gained for Stoke? I guess it is as they limp towards the safety line. But it's not the victory they craved and another blank for them. I'm sure West Brom will view it as a good point."

Romelu Lukaku headed Albion's best chance over the bar in the second half.

Stoke entered 2013 on the back of a 10-match unbeaten run which left them just four points adrift of the top six.

But the draw against Albion was only their fifth point in 10 top-flight matches since the turn of the year.

Tony Pulis has faced criticism from a section of the club's support in recent weeks, but the home fans appreciated their team's endeavour against the Baggies, if not their final product.

Stoke are the Premier League's second lowest scorers, with just 27 goals in their 30 matches.

Trinidad and Tobago striker Jones has scored only three times in the top-flight this season and showed a lack of conviction when he pounced on a high ball in front of the Albion goal.

Pulis's side shaded possession in a competitive first half but were unable to create any clear-cut opportunities to test Foster on the visiting goalkeeper's return to his first professional club.

While failing to stretch the recently recalled England goalkeeper, Stoke managed to protect their own goalkeeper with Albion restricted to just one effort at home stopper Asmir Begovic.

Baggies captain Chris Brunt latched onto a throughball from James Morrison inside the opening five minutes but shot straight at Begovic who fumbled before gathering the ball at the second attempt.

Albion beat home side Stoke at the Victoria Ground on the first weekend of Football League fixtures in September 1888. Joe Wilson and George Woodhall netted as the visitors registered the first clean sheet in the Football League.

Albion have enjoyed a productive first season under the stewardship of head coach Steve Clarke and would have moved within four points of fifth-placed Arsenal had they forced a winner against the Potters.

Belgium striker Lukaku has been in inspired form for the Baggies in recent weeks, having scored four goals in his past three matches, and somehow failed to net his 14th goal of the season shortly after the hour.

Albion right-back Billy Jones stayed onside to collect Brunt's deflected free-kick before sweeping a cross into the danger-zone which cannoned off a startled Lukaku and went over the crossbar.

Stoke striker Jones' late miss secured the draw and meant his team failed to score for a 13th league match - more than any other top-flight team.

"It was a very honest, committed game with very few chances. Probably the best opportunity was Kenwyne Jones' chance right at the end.

"The greatest thing about today was the crowd turned up and were great. There has been a bit of discontent around the place but they were fabulous from the first minute to the last minute."

"It's a point we're happy with. It's a difficult place to come, we defended well and they didn't have many chances either.

"The positives for us are that we have got a clean sheet and a hard-earned point away from home."

"We have been in the top half of the table all season and we want to stay there. Qualifying for the Europa League is almost beyond us and to get there we would have to go above a number of good teams. That will be difficult."