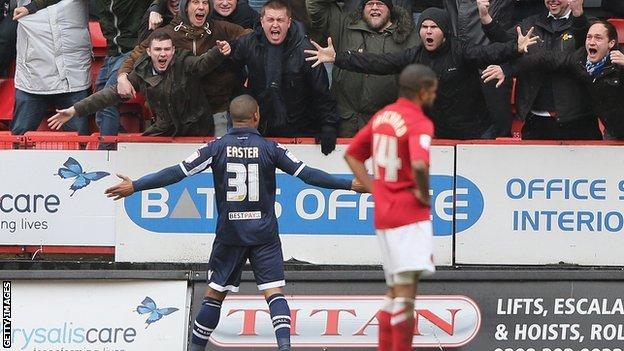 Jermaine Easter scored with his first touch for Millwall as they claimed a deserved victory over rivals Charlton.

Yann Kermorgant went closest for Charlton when he curled a free-kick just over, early in the second half.

Then on-loan striker Easter, who joined from Crystal Palace on Friday until the end of the season, put Millwall in front a minute after coming on.

Defender Shane Lowry hit a superb free-kick to double the visitors' advantage and seal the victory.

Millwall, who beat Blackburn on Wednesday to earn an FA Cup semi-final place, had taken their eye off league matters with seven defeats in their last eight games, so manager Kenny Jackett will be relieved to have taken three points in this south London derby.

The Lions created the best of the few chances in the first half as Dany N'Guessan fired an early effort wide before Liam Trotter missed the target with a volley.

The hosts' Bradley Pritchard forced David Forde into a save with a dipping shot which the Millwall goalkeeper needed two attempts to gather. Forde then tipped a powerful Callum Harriott strike wide.

Easter, who scored on his Millwall debut during a previous loan spell in 2008, latched onto a clever through-ball from Richard Chaplow, who also signed on loan on Friday from Southampton, and the striker flicked it under the advancing Charlton goalkeeper David Button.

Pritchard then fouled Adam Smith 35 yards out and Lowry curled a superb, dipping free-kick past Button for his first goal of the season to ease fears of being dragged into the relegation scrap.

"I'm mystified by it (not winning at home since 12 January). I'm baffled. I'm embarrassed for my players and for my supporters because we have tried everything with regards to performing at home.

"We created the better chances but you have to take the ones that come your way. It didn't happen through good defending, good goalkeeping or us not hitting the target. We have just got to soldier on."

"The first goal was always going to be crucial. It was a very tight game and conditions were tough.

"We started the morning five points off the bottom of the league and we had to get going.

"Hopefully the players can take confidence from what has been a very good week."