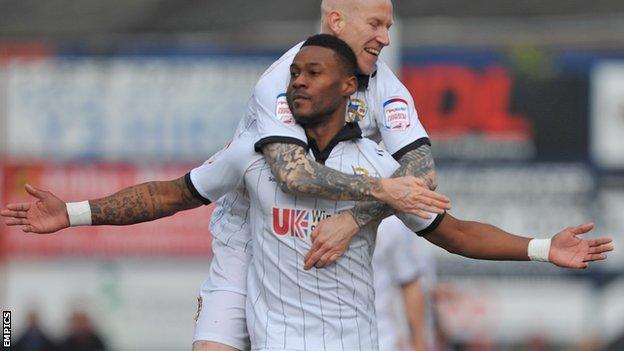 Jennison Myrie-Williams and Lee Hughes hit the goals as promotion-chasing Port Vale won at York to end their winless run with a first victory in six games.

Myrie-Williams, who had not scored since 5 January, fired Vale ahead from inside the box in the seventh minute.

Hughes then tucked away the clinching second from close range, after Myrie-Williams missed from the penalty spot.

They are also back to within four points of League Two leaders Gillingham, who were also held to a draw at Morecambe.

York, now just a point clear of danger after their 14th game without a win, handed a debut to new Ipswich Town loan signing Josh Carson.

Vale were without suspended pair Sam Morsy and Doug Loft, while Ryan Burge, facing disciplinary action for his behaviour after the midweek loss to Bristol Rovers, was also missing.

But, for top scorer Tom Pope, League Two's leading marksman with 25 goals, it is now 11 matches since he last found the net.

"Decision making, energy, all the good things that you require in football - we didn't have it.

"But it's the third game, you're learning all the time about the players and what I have done today is learnt a hell of a lot about the group here and started to understand why they are in the position they are in.