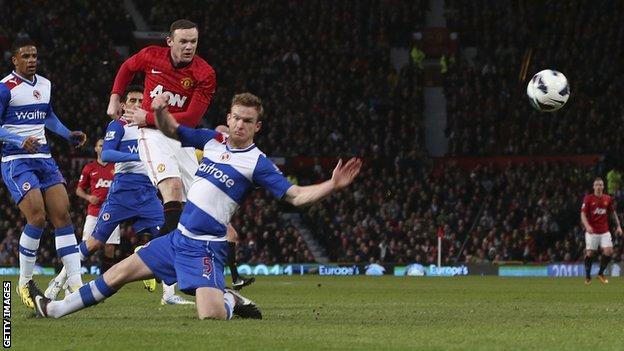 A goal from Wayne Rooney helped Manchester United edge a step closer to the Premier League title with a stuttering victory over managerless Reading.

Sir Alex Ferguson's side took full advantage of Manchester City's defeat at Everton to open up a 15-point gap at the top of the table with only nine games remaining.

But it was a far from convincing performance from a much-changed United side, which failed to overwhelm Reading, led by caretaker boss Eamonn Dolan.

Reading almost equalised through Hal Robson-Kanu's shot and had a strong penalty appeal turned down when Nemanja Vidic pushed Adrian Mariappa after the interval.

With United increasing their advantage over City by three points, though, Ferguson will care little and his side now only need to earn another 13 points to guarantee their 13th Premier League crown.

That total could well be lower, since it assumes Roberto Mancini's men will take maximum points from their nine remaining fixtures.

Reading remain second from bottom and are still seven points from safety after dismissing previous manager Brian McDermott before their trip to Old Trafford.

But there was plenty of encouragement for the hard-working Royals, who hope to announce McDermott's successor before they return to action at Arsenal on 30 March, following the international break.

Reading were perhaps aided by a disjointed United, who made eight changes to the side that drew with Chelsea in the FA Cup last week.

But Ferdinand, one of three players to remain, highlighted his continuing value following his recall to the England set-up this week.

Roy Hodgson's decision may have surprised Ferguson, but the 34-year-old defender was accomplished in defence and pinged a lovely cross-field pass to Young, who fizzed a shot wide, before setting up Rooney's goal.

Ferdinand was allowed to surge forward in the 21st minute, bisecting the Reading midfield, before laying off to Rooney, whose shot was deflected in via Alex Pearce.

It was harsh on Reading keeper Stuart Taylor, who made good saves from Rooney and Danny Welbeck, and the Royals spent the rest of the first period in relative comfort as United looked happy to sit on their lead.

Indeed, it was the visitors who came closest to scoring next when Robson-Kanu's shot went inches wide of David De Gea's post after Garath McCleary cut in from the left.

Dolan, who was taking charge of his first game in league football following a spell at Exeter when they were a non-league side, furiously guided his team from the touchline as they searched for a response.

And they had a legitimate penalty appeal turned by referee Lee Mason just after the break when Vidic shoved Mariappa.

At the other end, Robin van Persie, who had only scored one goal in his last nine games coming into this contest, stung Taylor's hands with a vicious free-kick and Rooney fired over late on.

But the hosts will be relieved to come through unscathed, although a more incisive team than Reading could well have caused more problems.

Reading caretaker boss Eamonn Dolan: "I'm never proud when we lose but considering it has been a difficult week, and all we had to deal with, I'm pleased with the players and how they have gone about it.

"They were very flat on Tuesday but we knew we had a job to do. I've been speaking to Brian McDermott as a friend all week. And in fact, Brian was the first to text after the match.

"It was a clear penalty [on Adrian Mariappa] but I think the referee thought I was on work experience and 'perfect a little 1-0 loss for Reading' and would be fine.

"I wouldn't have expected that from the referee but what can you do?"

When asked whether he would 'throw his hat into the ring' (regarding becoming permanent manager), Dolan replied: "Brian is a great friend of mine, so that would be, I wouldn't do that, because that would be wrong."