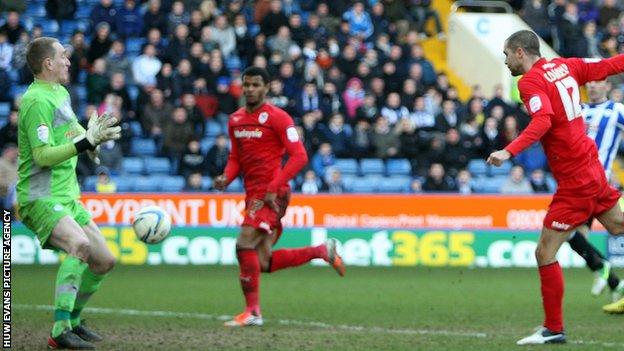 Cardiff City ended a run of three games without a win to open a seven-point lead at the top as Sheffield Wednesday edged nearer the relegation zone.

A poor first half ended with Don Cowie breaking the deadlock with a driven shot from the edge of the area after Wednesday failed to clear a corner.

Another set-piece saw the unmarked Matthew Connolly double the lead with a close-range header.

Miguel Llera's 70th-minute free-kick was a rare effort from the home side.

With relegation rivals Peterborough and Wolves both winning, the defeat leaves former Bluebirds boss Dave Jones's Owls only one point clear of the bottom three.

While lacking polish, due in part to the poor state of the Hillsborough pitch, Cardiff showed real grit and determination to grind out a victory that will help ease some doubts about whether they can keep their nerve in the run-in.

Their 11-point lead at the start of February has slowly been eroded by the chasing pack over recent weeks and it stood at only four points prior to the game in South Yorkshire.

But the advantage has a commanding feel once more as Cardiff's victory coincided with defeats for their nearest rivals, Hull City and Watford.

An uneven and patchy pitch hindered any hope of flowing football. Coupled with the anxiety for points - for contrasting reasons - entertainment and goal-scoring opportunities were at a premium.

And not for the first time this season, set-pieces proved decisive as the Bluebirds won their 10th away league game.

Having barely managed a shot during the opening period, the visitors broke the deadlock moments before half time from an unlikely source.

Craig Bellamy's whipped delivery caused concern in the home six-yard box and was only half-cleared to Cowie on the edge of the area. The midfielder's low drive found its way into the net through a forest of legs for only his second goal of the season.

The opener failed to change the nature of a scrappy game, but the visitors had few complaints as another well-delivered set-piece led to a second goal 20 minutes into the second half.

Peter Whittingham's in-swinging free-kick found an inviting space between Chris Kirkland and Wednesday's back four, and as the goalkeeper hesitated on his line, Connolly arrived unmarked to head in low from six yards.

It was not until 20 minutes from time that Cardiff goalkeeper David Marshall had to make his first save, tipping Llera's free-kick over the bar.

Leroy Lita, on loan from Swansea City, had an effort ruled out for offside as Wednesday piled forward. The visitors survived a late goalmouth scramble, but in truth they always looked in control.

"But we've switched off at key times and that's disappointing.

"We've shown a little bit of naivety where maybe they've got that edge of experience over us."

"It's another three points towards where we want to go. We've been top since November 24 and it's a long time to be there and be shot at, discussed, debated - I'm very pleased with the mental strength of our players to deal with that.

"They just keep taking on the team that's in front of them and going on to the next one.

"We were up against a side who need to win games to stay out of the relegation zone so we knew it would be a battle.

"You have to keep entering into those battles and eventually you start to win them. We kept at it and got the result we deserved."