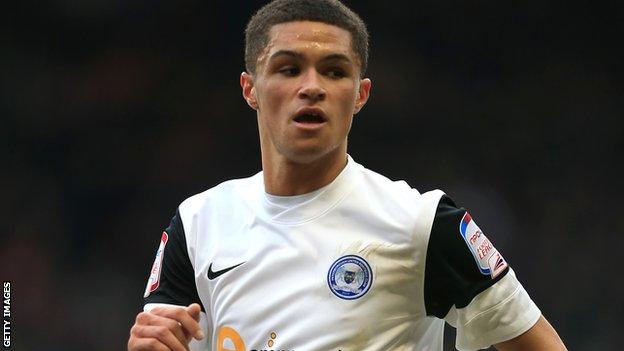 Peterborough midfielder Kane Ferdinand scored his first goal for the club as they beat Blackpool to boost their Championship survival hopes.

Ferdinand's header stretched Posh's unbeaten streak to five matches and moved them to within a point of safety.

Dwight Gayle and Lee Tomlin could have doubled their advantage after half-time before Blackpool mounted a late rally.

Home winger Matt Phillips was denied when his goal-bound effort was blocked by team-mate Nathan Delfouneso.

The Tangerines, who fall to 17th place and are only four points clear of the relegation zone, dominated a first half overshadowed by a serious head injury sustained by their veteran midfielder Barry Ferguson.

Kane Ferdinand, 20, is the cousin of Manchester United defender Rio Ferdinand and his brother Anton, who is currently on loan at Turkish side Bursaspor.

The former Scotland international, 35, was stretchered off following eight minutes of treatment on the pitch after being accidently caught by team-mate Isaiah Osbourne's boot.

The hosts, seeking to build on a first win under Paul Ince at Watford in their last outing, were looking lively when Phillips drew a sharp early save from Posh goalkeeper Bobby Olejnik when he fired a hard shot into the ground from an acute angle.

Manager's son Tom Ince was agonisingly close to a decisive touch when Alex Baptiste whipped in a ball across the face of Peterborough's goal.

But their hard work was undone when Ferdinand put the visitors ahead with a simple finish moments before the interval.

Jack Payne chipped towards Tommy Rowe in the Blackpool penalty area and Rowe's header back across goal was nodded in by Ferdinand.

Other than Phillips' late effort, Blackpool rarely threatened the Peterborough goal as they searched for an equaliser after the break.