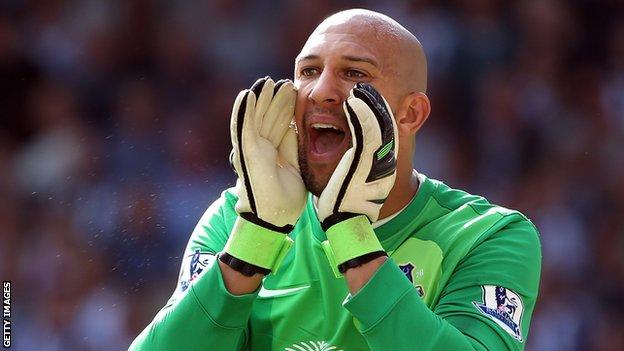 Everton goalkeeper Tim Howard faces a spell on the sidelines after fracturing two bones in his back.

The 34-year-old American suffered the injury in the FA Cup fifth round replay against Oldham 11 days ago.

His manager David Moyes thinks Howard will be out for around four weeks.

Slovakia international Jan Mucha, who made his Premier League debut last weekend in a 3-1 win over Reading, will again deputise against Wigan in Saturday's first FA Cup quarter-final.

The end of Tim Howard's run

The United States international had played in every league match for Everton in the last five-and-a-half-years, since 30 September 2007

"Tim is out against Wigan. He has broken two bones in his back," Moyes told the club website.

"We don't think he will be out for the season. I read that (Newcastle's Fabricio) Coloccini could be out for seven weeks (with a similar injury) but we are not sure how long Tim will be out for because, obviously with a goalkeeper, he has to dive around and hit the ground.

"I have let him go away for a few days. It might be that, if everything goes well, he misses next week's game as well [against Manchester City] and then because of the international break he might be close after the rest because that would be four weeks."

Moyes revealed Howard had not suffered an injury to weight-bearing bones and also that they were not part of the player's spine.

"It just needs a bit of healing time. It is not like a pure fracture where you need to wait to look at it.

"It is a question of whether he can cope with the pain. The bones will heal themselves but it's not good."