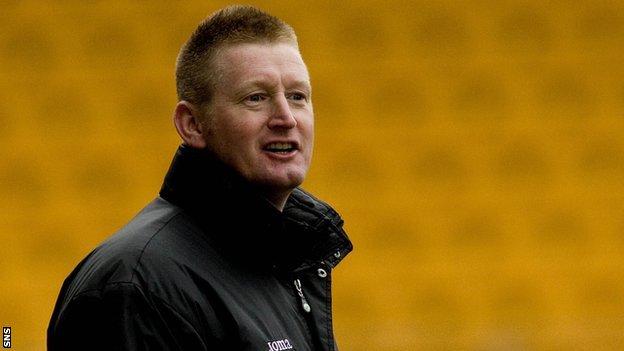 St Johnstone manager Steve Lomas has been left frustrated by his side now facing a three-week break.

The Perth manager was hoping to build momentum after his side's 2-0 victory over Kilmarnock.

But they are now out of action until a Tayside derby at home to Dundee United on 1 April.

"We've given ourselves a great chance [of reaching the top-six], but unfortunately we've now got a three-week break," said Lomas.

"It gives us a chance I suppose to bring back some bodies - Gary Miller and Frazer Wright.

"But, whenever you get a good win like that you look to have a game straight away, so a three-week break is very frustrating."

And Lomas also questioned the wisdom of the Scottish Premier League scheduling system.

"It is bizarre that you have six games in 23 days and then all of a sudden you've got three weeks off," he said.

"We come back and we've got a very difficult game, we've got Dundee United.

"Then we've got two games in four days - I'm perplexed at the fixture list."

However, the Northern Irishman was happier about his side's display, despite the game being relatively free of chances.

"I thought we were good," insisted Lomas.

"We passed the ball, we knew the way Kilmarnock try and play, I thought we were thoroughly deserving of the three points.

"I felt we totally dominated the game."

Lomas also added he was pleased to see Gregory Tade, who has endured a frustrating season, back on the scoresheet

"Gregory hasn't been in the goals too much of late, so it was good for him," he said.

"But I thought it was a good team effort and I can't remember too many opportunities Kilmarnock had."