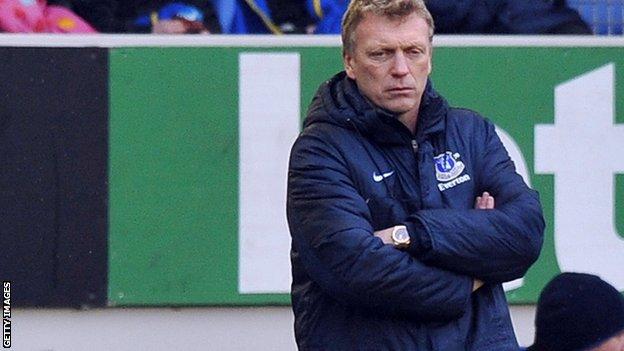 Everton manager David Moyes said he and his players could have no excuses after they were beaten 3-0 by Wigan in their FA Cup quarter-final.

Wigan scored three times in less than four minutes in the first half to reach the last four for the first time - while Moyes will soon mark 11 years without a trophy at Everton.

"We can't argue against the fact Wigan were the better side," said Moyes.

"It was an opportunity to get to an FA Cup semi-final but we can't complain."

Moyes added: "We were not good enough. We haven't had too many of these days this season, or since before January last year, but this was one of them.

"It was one of those days when it didn't go well at all. We just didn't perform and never gave ourselves any opportunity."

Everton's influential midfielder Marouane Fellaini looked disappointed to be substituted after 67 minutes, while captain Phil Neville was substituted at half-time after his error led to Wigan's second goal.

"I had to make a decision and we're all in it together," said Moyes. "I thought we needed to try something. When you lose one goal you can try to calm things down but when you lose three it makes things so difficult.

"But this is a team here and we work together as a team. I don't point the finger at anybody. I might do it in the dressing room but I never do it publicly."