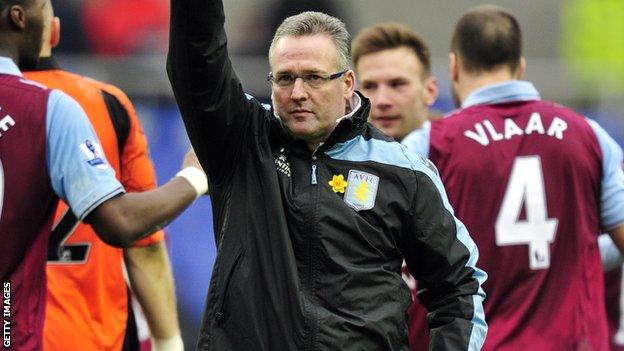 Aston Villa boss Paul Lambert believes his side have the momentum to beat the drop after their 2-1 win at relegation rivals Reading.

Gabriel Agbonlahor earned victory with a brilliant volley on the stroke of half-time that moved Villa three points clear of the relegation zone.

Villa on the up

Villa face an important home game against QPR on Saturday.

"There will be a few teams looking over their shoulder tonight. We have a bit of momentum," Lambert told BBC Sport.

Villa fell behind at the Madejski Stadium when defender Nathan Baker sliced the ball into his own net. But an almost immediate response from Christian Benteke and Agbonlahor's volley, which came after a fluid passing move, gave Lambert's side their first victory in a month - and it could not have come at a more crucial time.

"To lose an own goal was a blow but the way we bounced back was terrific and I am very proud of my players tonight, they deserve so much credit," added the Scot.

Villa had won only one of their previous 11 league games and went into the weekend in the bottom three, but Lambert says his side believe they can get out of trouble.

"The goals that we scored were excellent - we don't look like a team fighting for its life," Lambert said.

Of course they are entitled to boo to cheer, but from my point of view we need the fans on board 100%

"I see a lot of confidence in the players - they have been playing really well without the rewards."

The defeat leaves Reading level on points with bottom club QPR, with trips to Manchester United and Arsenal next up.

Reading manager Brian McDermott was left cursing his side's inability to hang on to their lead. "We were 1-0 up and I thought we were going to kick on, but we shot ourselves in the foot and gave away two goals before half-time.

"We had opportunities in the second half and we couldn't quite convert our chances. We are so disappointed. That hurts today, it hurts the players, hurts me and hurts the fans. But we have to lift ourselves, we have 27 points to play for and we need to move on quickly."

A section of home supporters booed the team at half-time, at full-time and during periods of the game. "Of course they are entitled to boo or cheer, but from my point of view we need the fans on board 100%," said McDermott.

"Sometimes they will disagree with my decisions. I have no problem with that. The margins are very, very fine in this division and we saw that again today."