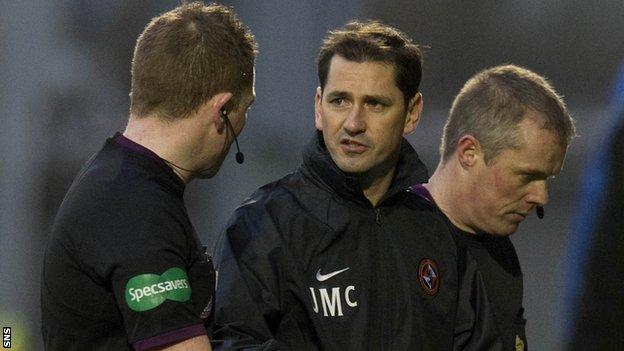 In a dull, goalless draw in Paisley, referee John Beaton sent Rankin off in the 88th minute for a two-footed challenge on Saints' John McGinn.

"I didn't see it as a red at all," McNamara told BBC Scotland. "From what I've seen I thought it was very harsh.

"So we'll look at it again and obviously we might look to appeal."

And McNamara added: "I think John's gone to ground and the lad's [McGinn] kind of tried to turn into him."

United extended their unbeaten run to five games with this draw, but they remain seventh in the Scottish Premier League.

"I don't look at it as being unbeaten, I look at it as two points extra that we had wanted to go and win today to get in the top six," McNamara said.

"I'm disappointed we've not got the three points. Second half we were better but first half I thought we weren't great.

"We were too negative at times instead of going at them. Some of them looked a bit nervy with a couple of wee mistakes.

"I said to them at half-time to be more positive, pass the ball forward and do things quicker. When they do that you can see that we are better and we caused them problems."

But neither team could produce the finishing touch and Rankin's dismissal became the main talking point.

McNamara was without strikers Johnny Russell and Jon Daly due to injury and handed a debut to Rory Boulding, who arrived at Tannadice midweek.

"I thought he did well for the time he was on," reflected McNamara.

"We knew it was a big ask putting him in at the deep end today but we didn't have many options.

"He hasn't played a lot of football and was unfortunate with one chance in the first half. He'll get fitter as the weeks go on."

Daly, subject to transfer speculation linking him with a move to Rangers, is said to be "touch and go" for the Dundee derby next weekend.