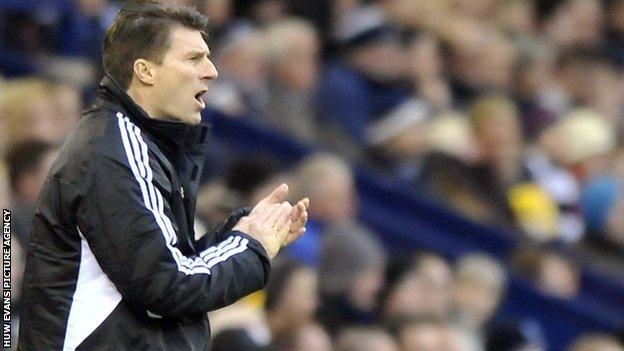 Michael Laudrup was critical of referee Lee Mason after he disallowed a goal in Swansea's 2-1 loss at West Brom.

Mason ruled out a last-gasp effort from Roland Lamah, although replays showed that the ball struck keeper Ben Foster and Gareth McAuley before the Swans substitute put the ball in the net.

But Mason ruled that Lamah was offside and West Brom hung on for victory.

"How on earth can you disallow a goal when the ball comes off an opponent?" said Swansea manager Laudrup.

"Equally everybody knows you can never be offside if the ball comes from an opponent. And in this case, it's not coming from one opponent it's coming from two.

"From the defender, to the goalkeeper and back to Roland. So how on earth can you disallow that goal?

"All season I've said that after a game we have three or four chances to see things and then we can decide whether we thought it was or wasn't. The referee only has two or three seconds.

"But we are talking about decisions whereas what happened with the disallowed goal is against the rules."

Laudrup's opposite number, Steve Clarke, admitted the goal should have been given.

"We got a lucky break. It should have been given. It was a goal. I think it came off Ben Foster last so that is fortuitous," said Clarke, who saw his West Brom side secure their third win in four league games.

Jonathan de Guzman's own goal in the second half saw the home side take the lead but Laudrup felt his side deserved a point that would have been secured had Lamah's late goal been allowed.

"The 'goal' should have been the equaliser, which I think would have been a fair result looking at the game overall," Laudrup added.

"But I'm very satisfied with the attitude of my players and their reaction in the last 15 minutes. We just didn't get the luck today."

Swansea's defeat came a day after Laudrup signed a new contract extension to stay at the Liberty Stadium until June 2015.