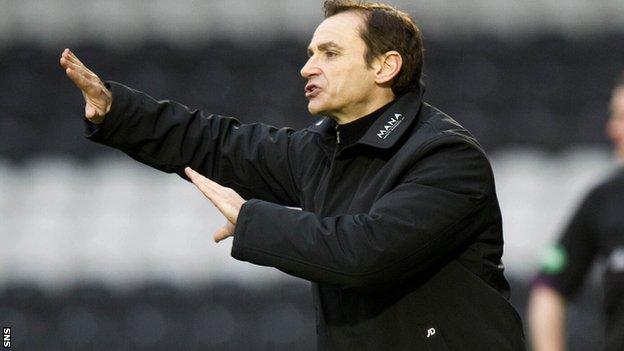 Danny Lennon is relieved his St Mirren side can now concentrate on preparing for next Sunday's League Cup Final against Hearts.

Saints ground out a point in Saturday's goalless draw with Dundee Utd.

"I'm absolutely delighted now we can go into a working week with full focus and preparation on the cup final with no games in between," said Lennon.

"It's been a demanding couple of weeks for us and it's hard to keep the build up to the game away from them."

And Lennon added: "Some of them will be playing what will be the biggest game of their career.

"In all our preparation we'll leave no stone unturned.

"We want to go there on Sunday, bring that big cup back and make it a memorable occasion for our fans."

Lennon, who has made a habit of rotating his squad in recent times, made five changes for Saturday's contest with United.

The Buddies dominated the first-half and Steven Thompson's header landed on the roof of the net after he met Gary Teale's cross.

In a more open second-half, Dougie Imrie went closest with a half-volley that almost brushed the bar.

"Craig Samson's had a key moment in the game, with a fantastic stop from short distance," Lennon said.

"We just couldn't seem to get over that finishing line.

"[After the cup final] we then come into nine very important league games and that's our bread and butter.

"We certainly want to keep climbing that table.

"Every point that we've gained this season, we've had to fight and scrap for, and that was certainly the case today."